Alexi Ogando Lets Josh Hamilton Get Away With Being Lazy

A strong start by Yu Darvish is masked by Josh Hamilton's inexcusable performance.

Share All sharing options for: Alexi Ogando Lets Josh Hamilton Get Away With Being Lazy

What is Josh Hamilton's problem?

It never seemed like it would come to this point back in May, when he was destroying baseball and making it look like his final year in Texas would be a memorable one (the good way). Now he's seemingly checking out, swinging at every pitch and shrugging that off as fine, taking plays off in the field, and getting booed by his home fans.

Friday night was perhaps the low point. It was the opposite of his heroic game against Boston two years ago. It was the night Josh Hamilton did everything wrong.

Hamilton flailed miserably, and repeatedly, at just about anything thrown his way. Both of his strikeouts against Chris Sale came on three pitches. He struck out twice and failed to reach base even once. Until he realizes he can't hit pitches a foot beneath the strikezone (seriously), he's going to continue to be a black hole in the lineup. Instead of being an MVP caliber talent right now, he is playing like someone who shouldn't even be on a Major League roster.

Worse was his performance in the field, where he literally did not even seem to care. In the first inning, Adam Dunn sent a routine pop up towards Hamilton. After taking a few steps back, Hamilton trotted in like there was nothing at all to concern himself with and let the ball drop in front of him for a single. Another single set up a sacrifice fly to send Texas down 0-1.

Oh, but he wasn't done. In the fourth, he again loped to a ball like it didn't matter before soft tossing it back to second, allowing Gordon Beckham to stretch a single in to a double. Once again, the result was an extra run following a single.

It's hard right now to remind yourself of all the great he's done over the last few years. He has become infuriating. There are few more annoying baseball players than those who possess little plate discipline, or little effort in the field.

Since this was a one-run game until the ninth, it seemed like those fielding mistakes -- and his inability to bring home runs without making an out -- would loom large, but Alexi Ogando saw to protecting that. For whatever reason, the reliever was kept in for a third inning in a one run game, and completely fell apart, with a walk, a double, and a home run to end any Texas threat.

Masked was a strong start by Yu Darvish. With a little under a third of his pitches finding the strike zone, Darvish did was not incredibly efficient, but a questionable zone and pathetic defense helped run up his pitch count. He allowed six runs, but not thanks to an inordinate amount of strong contact (outside of a Kevin Youkilis home run). There were three walks, but also six strikeouts, and 11 swinging strikes. Everyone is going to look at the runs allowed and worry that Darvish is back to struggling, but he pitched a game you should probably take most of the time. With better luck and a better left fielder, the Rangers are probably winning when Alexi Ogando takes the mound.

Outside of Darvish, Nelson Cruz was a nice bright spot, with another home run, but that was about it. Texas lost a super frustrating game that we are all best forgetting about.

Biggest Play: With the bases loaded and two outs in a one run game in the seventh, Michael Young slaps a line drive directly at Alex Rios to end the threat (-15% win probability added). 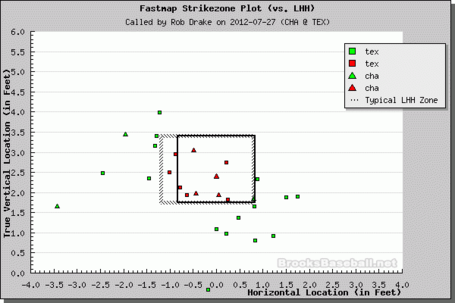 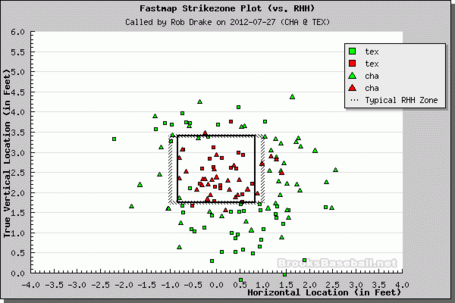