Texas survived terrible luck in the ninth inning to defeat the Seattle Mariners 3-2, on the strength of strong pitching from Derek Holland, and just enough from a still-struggling offense.

Share All sharing options for: Rangers Deliver Heart Attacks To Start Second Half

After an excruciatingly-long All Star break, baseball is finally back. Unfortunately, the same can't be said of the Texas Rangers offense.

Safeco Field is certainly a run-suppressing environment -- it notably swallowed up an Elvis Andrus shot that would have left most parks -- but the Rangers turned in a pathetic performance regardless of the stadium. This wasn't a case of hitting the ball well and just not finding holes. With half of their contact driven futily in to the ground, Texas was probably lucky to score even three runs. The first came fortunately when two of those grounders found space, and Ian Kinsler brought home a run on a single. The next two came the next inning when Josh Hamilton followed the long Andrus out with a single, and Adrian Beltre lofted a towering home run to right to end the Ranger scoring.

Fortunately, the Mariner offense was even worse. Derek Holland was not dominant, but he was good enough, and Seattle did the rest of the work. Holland had four strikeouts against two walks -- both in the same inning -- with seven swinging strikes, and good command of the zone outside of the fourth inning. The fourth featured a pair of walks to load the bases, and repeated strong contact from Justin Smoak managing to stay just out of play before he and Miguel Oliva popped up to end the threat. From there, Holland avoided the free passes, while the Mariners avoided doing anything of their own, allowing Holland to hit seven and a third shut-out innings before going to the bullpen.

That's where the terrifying stuff happened.

The ninth inning began with a Jesus Montero ground out. Joe Nathan was on the mound, which usually means things will be easy. We got nothing of the sort this time.

Kyle Seager came up with the Seattle win expectancy at 1%, then slapped a grounder that just barely missed the glove of a diving Kinsler, putting a runner on. Now it was up to 3%; still nothing worth noting.

Then Justin Smoak did the same thing to Beltre, just nicking his glove with a grounder. Two runners on, win expectancy up to 8.4%. Nathan got another grounder out of John Jaso, and another grounder found the outfield; bases loaded, 17.4%. Still tiny, but it was supposed to be over.

Then another harmless ground ball off Michael Saunders reminded us all why Michael Young should never be on a baseball field wearing a glove, with his error allowing everyone to advance, and the shutout was gone. Texas finally got some good luck when the runners were held, but Saunders continued past first before getting caught in a run down to make it two outs.

Then Nathan started having struggles beyond the will of luck dragons. A wild pitch brought Jaso home to make it a one-run game, and a walk to Carlos Peguero -- the ninth walk of his Major League career -- put runners at the corners, and the win expectancy for Seattle at nearly one-in-five.

Of course, that still means four out of five times the Rangers should win, and this was one of those four times (pretend that's how it works). Nathan bared down and struck out Ackely swinging to finally end a brutal game. But a brutal Ranger win is better than any kind of Ranger loss.

The Kinsler single to drive in just one came with two outs, and was one of the few well-struck Ranger balls all game. Small things go on to loom huge.

As with every recent Ranger offensive struggle, we hope it is -- most likely -- just a game, or part of a funk at worst, and not a sign of bad things to come. As with every Ranger victory despite offensive struggles, we thank the team for having the best pitching in baseball. The Angels also lost, the game would have been another three runs to the run differential if not for some awfully bad luck in the last frame, and there is nothing really to panic about now that Nathan finally got around to shutting the door.

Really would like to see one of those blowouts again, though.

Biggest Play: With one out in the sixth, Adrian Beltre homers with Josh Hamilton at first, making the game 3-0 (19% win probability added). 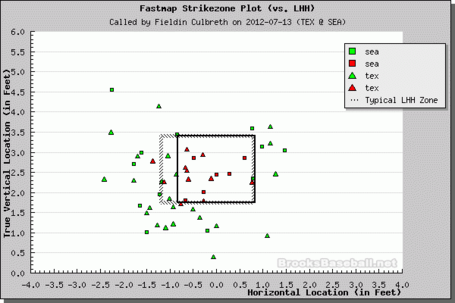 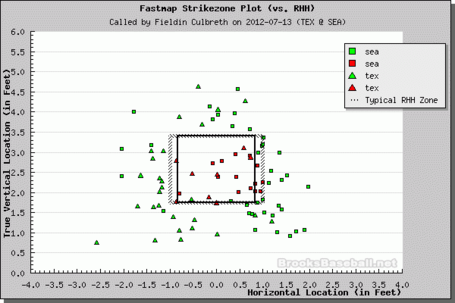