With all hope gone, a one-time defensive replacement and pinch runner delivered the clutch hit the Rangers needed. 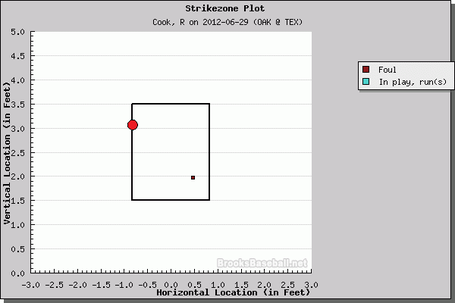 That large, red circle is an eighth-inning fastball from Oakland's right-handed closer Ryan Cook. It is in on the hands of equally-right-handed Craig Gentry, owner of a fairly-pedestrian .334 career wOBA despite facing primarily left-handed pitching. Gentry was left in against an unfavorable situation with the tying run on third, the go-ahead run on second, and an insurance run on first with two outs.

This pitch traveled at 96 miles per hour. It was thrown by a pitcher who allows 15 out of every 100 batters he faces to get a hit off of him.*

At this point, the Rangers had two separate innings with run expectancies over one, meaning they had twice been odds-on favorites to score what would be the tying run at this point in the game. By the odds on the release of that excellent fastball, Texas had squandered its chances of victory, and their light-hitting centerfielder was not the man to save them.

A great man once said, however, "that's the way baseball go."

You see, Light Hitting Center Fielder Craig Gentry turned on this high and inside, 96 mph fastball thrown by one of the AL's best relievers in 2012 holding the platoon advantage, and took it to deep left-center field. Young Cuban phenom Yoenis Cespedes was fooled mercilessly by the drive, coming in a few steps before turning and reaching his glove futilely in the air. The ball flew over his glove, bounced against the outfield wall, and the trio of Texas baserunners came home to score, giving the Rangers a 4-2 lead in a game that looked headed towards a shutout right up until there were four outs remaining in the contest.

Of course, since Gentry's wOBA is up to an amazing .394 after today, "light hitting" is probably a misnomer that maybe no one at all is still applying to him.

Baseball is fun because of how quickly, illogically, unpredictably, and incredibly a frustrating game can turn in to something amazing. The eighth inning needed the unbelievable to happen just for Gentry to even come up in his position. After falling behind 0-2 with a runner on and one out, Josh Hamilton defied his swing-away nature to work a walk. With two outs, Michael Young defied his own nature and reached base. Then with the bases loaded, Nelson Cruz, too, came back from two strikes to work a walk, giving the Rangers' their first run.

It also took incredible frustration for them to be down, blowing the aforementioned opportunities in the second and seventh. Most notably, bases loaded with one out in the second was foiled by a Mike Napoli strikeout and a Leonys Martin line drive traveling straight to the first baseman.

But, they won. So that's cool.

Matt Harrison continues to look like he's blossoming in to something special. His stuff was something unbelievable, garnering 12 swings and misses; six on a change set up by tremendous fastball location. 68% of his pitches saw the strikezone, despite a small (though not outrageous) zone from Gerry Davis. He went eight innings with seven strikeouts and just one walk against the team with the second highest rate of free passes in baseball. With nearly half of the contact he allowed hitting the ground, as well, he was able to clean up what few messes he started. Both runs were partly a result of his own few concerns, a hard hit ball for a triple and later a walk, but if you're complaining about two runs allowed you need to find a different sport. He was also bailed out by a stellar Nelson Cruz running grab in the 5th, but a pitcher should be helped now and then.

All told, Matt Harrison was excellent yet again. His FIP is now down to 3.43, and his ERA to 3.16. He is looking like a mortal lock for the All Star Game, and once a relative afterthought in the greatest trade in franchise history is becoming a key piece of the franchise.

Not so awesome was Tanner Scheppers, closing with Joe Nathan and Mike Adams unavailable. He brought the heat, but never missed a bat, struggled to find the zone, and allowed the home run that made this a one-run game Friday night. You don't need a great reliever to win a two-run game with one inning left most of the time, but Scheppers insisted on making it interesting.

That aside, the Rangers won, and with an Angels' loss are now up six games. They are also 20 games above .500, a feat they have accomplished only three times over an entire season in the history of the franchise.

It is currently still June.

*Studious folks will notice Ryan Cook has been better against lefties than he has righties this season. More studious folks will know he needs about 700 results against LHH before we trust that he has a reverse split.

Biggest Play: With the bases loaded and no outs in the bottom of the eighth, Craig Gentry triples to left-center, giving the Rangers a 4-2 lead (53% win probability added). 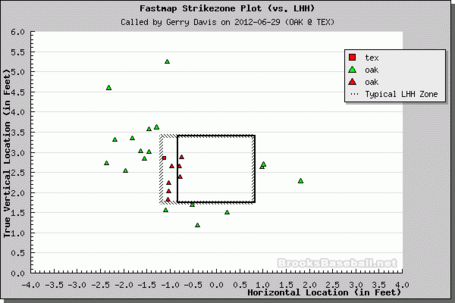 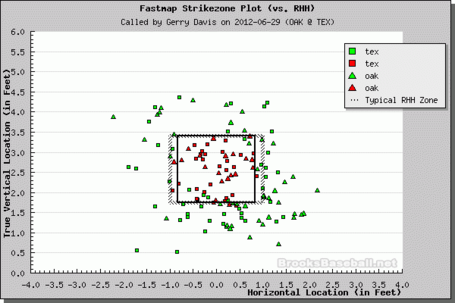