Rangers Bats Even Series Against Tigers

Yu Darvish settles down after a difficult first inning, and the Rangers offense breaks out.

Share All sharing options for: Rangers Bats Even Series Against Tigers

If every Texas Rangers pitcher is going to get hurt -- which feels entirely likely right now -- their offense is going to need to break out big for them to win games, and on the day Colby Lewis traveled to the disabled list, that's what they did.

Josh Hamilton and Ian Kinsler both showed up ready to swing the bat for the first time in what seems like forever. Kinsler led off the Ranger effort with a home run in his first at bat, and Hamilton rounded it off with a solo shot in the seventh that granted half-off pizza to north Texas.

The bulk of the Texas scoring came in an exciting fourth inning. With one out, Adrian Beltre reached second on a throwing error by Drew Smyly, and Michael Young finally punished a shallow outfield by roping a ball over their head for a triple. Nelson Cruz singled him home, stole second, and was then singled home himself by Yorvit Torrealba, who advanced to second on the play. Brandon Snyder tried to copy Torrealba, and brought home the run, but got thrown out at second.

Mike Napoli was the only Ranger starter without a base hit.

The game started a bit distressing, as Yu Darvish walked Austin Jackson and nailed Miguel Cabrera, setting up an 0-2 deficit after a Prince Fielder double. That was it for Darvish's struggles, though, as he turned in a game far better than four runs allowed would ever have you think.

Over each of the next three innings, Darvish hit the strikezone on more than 70% of his pitches, and did so 75% of the time after coming in for a seventh. After dancing around the zone in his first inning, Darvish locked in and commanded the rest of the way.

If there was anything concerning after the first inning, it was surrendering a few more fly balls than typical, some testing the warning track. There was also a home run off Fielder's bat on a poor slider, but these are what kept a great start from being perfect. One walk and one home run against 10 strikeouts is more often than not going to hold an offense under four runs.

It is in these moments we all need to remember: Yu Darvish is 25, and he is ours.

On the subject of things to thank Jon Daniels for, Joe Nathan is a legendary beast who spits fire. Two more strikeouts in a perfect ninth inning is another (glorious) finger in the face of those of us who questioned his signing.

Biggest Play: With one out in the fourth and Adrian Beltre on second, Michael Young triples, making the game 3-2 (14% win probability added). 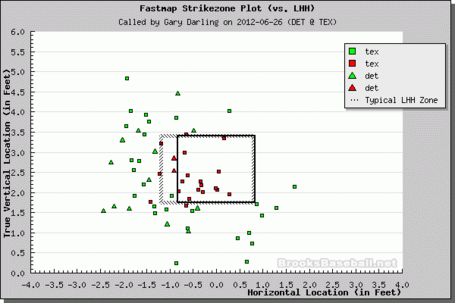 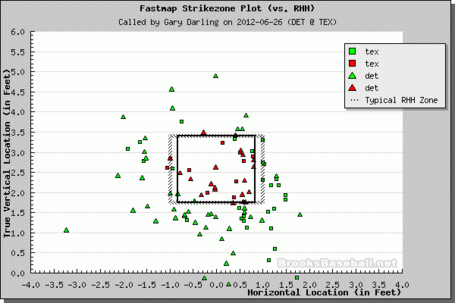