A fairly quiet game highlighted by young studs stepping up becomes a thrill ride in the final frame.

Sunday's Rangers vs. Rockies game meandered along as a barely noteworthy contest, until Joe Nathan entered and decided we needed some excitement in our lives.

Thanks to Matt Harrison leaving (more on that later), Texas needed the full extent of its bullpen, which meant the normally-dominant closer was pitching the ninth of a four run game. The alternative being Scott Feldman.

Nathan was putrid, while getting no help from umpire Wally Bell, walking the first two hitters he faced, and hitting the third to load the bases without an out. Marco Scutaro lined a single to bring home a run, and in a game where Texas sent one of the best relievers in 2012 to the mound with a four run lead, Colorado suddenly had a win expectancy of nearly one-in-five.

It really got even closer than that against the next hitter. Carlos Gonzalez launched a ball to deep left center that looked for a moment like it was going to give the Rockies the lead on one swing, then looked like it might merely fall in to clear the bases and tie it. Instead, Josh Hamilton saved the game with a brilliant catch at the wall, allowing a run to score to make it 4-2.

Next up was hilarity. Nathan continued to look ugly, with a wild pitch to Jason Giambi allowing runners to advance. Mike Napoli was able to coral the pitch, though, and caught Scutaro in a run down heading to second. Michael Young hesitated too long, though, and Scutaro was safe. Only thing was, Scutaro didn't know he was safe, and Elvis Andrus tagged him as he walked away from the bag.

This thing actually happened. If the ninth inning was a dramatic story, Marco Scutaro served as its comic relief. The Rockies kept Rangers fans on their toes, before one big "nah, just kidding." Giambi struck out, and a game that looked frightening just minutes before was suddenly over.

Outside of Nathan, the pitching was superb. Tanner Scheppers had a great outing in particular, with three swinging strikes on his fastball, two strikeouts, and an impressive curve. Mike Adams and Robbie Ross each had a strikeout in shutout innings.

Matt Harrison looked decent enough, dominating with his combination of two seamer and change up, getting all of his combined nine swinging strikes -- a silly 13% rate for the start -- on the two pitches. He had two walks, but also three strikeouts and no runs allowed. He seems to have found his groove as one of the very best pitchers in 2012, but then the baseball gods continued to punish the Rangers for having a completely healthy rotation in 2011 by kicking Harrison out in the fifth with lower back tightness. Hopefully it is nothing that will last past Sunday, or the Rangers rotation begins to be panic-worthy.

Scheppers and Harrison's good showings were part of a youth movement theme for the evening. The man who came over in the same trade as Harrison, Elvis Andrus, continued his campaign to be named the best shortstop in baseball, getting three hits -- including two hard hit doubles -- and a walk. On the game, Andrus raised his wRC+ to 118 on the season, which would have trailed only Asdrubal Cabrera in the American League going in to the game; but Cabrera does not have Andrus's stellar fielding and base running skills. It is absolutely incredible to see Andrus transforming in to the stellar player we hoped he had the potential to be. While he may not be the shortstop of the future thanks to the talented Jurickson Profar, the present is incredibly fun to watch.

The other part of youth movement night was the (likely [hopefully]) center fielder of the future Leonys Martin. With a double and a triple, he joined Andrus as the only multi-hit Rangers on the night. He had three of the team's four RBIs, and scored the fourth himself. Both players did it in the field, with Andrus making several strong picks and the heads-up tag of Scutaro, and Martin redeeming himself after losing a ball in the sun by running down a fly ball. Just as Elvis growing up is exciting, these flashes of seeing some promise for the future Rangers' outfield are fantastic.

The offense was likely a touch better than the four runs scored suggests, with several hard-hit outs, though the biggest concerns continued to look poor. Josh Hamilton finally managed a single, but Ian Kinsler had three excruciating strikeouts. One more game doesn't make it much more likely that the two are going to be awful for the foreseeable future, but it is one more game that is painful to watch. It goes without saying, but the sooner they snap out of it, the better.

Complaints aside, Texas is up to 17 games over .500. Their run differential is up to +95 while no one else is even at +70. They have a five game lead when no other team has four. They've won another series, and we're all back to feeling okay.

Biggest Play: After successfully beating a rundown and advancing on a wild pitch to put runners at second and third with one out in a 4-2 ninth inning, Marco Scutaro thinks he's out and drifts off of second base, getting tagged out by Elvis Andrus (14% win probability added). 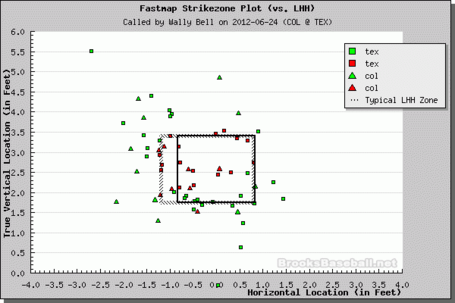 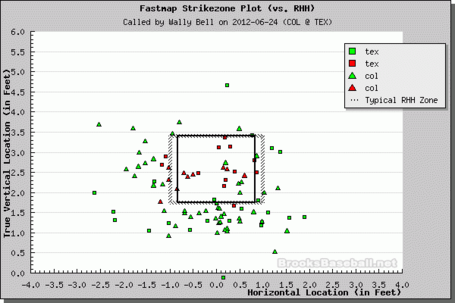