Josh Hamilton makes history, and two young stars in the making help him with another Texas blowout.

Share All sharing options for: The Josh Hamilton Show: History In Baltimore

That is the list of the players in the history of Major League Baseball who had hit four home runs in a single game on Tuesday morning.*

By Tuesday night, Josh Hamilton was added to the list.

It's a little amazing that Josh Hamilton still has surprising, historical nights to show us that we haven't already seen.

Not only did he tie a single-game home run record, but he got all of a pitch that reached the track in the deepest part of the park for a double, giving him an AL record 18 total bases in one game.

Jake Arrieta's curveball was actually working well much of the night, but Hamilton pulled one outside for the first of his home runs, a towering fly ball just over the left-center wall.

The next time Arrieta saw him, he scrapped the curve for the sinker, throwing two way two high, and then another outside. Outside, but not too outside for Hamilton to send about six rows deep in right field. On his might swings, Hamilton had his team up 4-0 in the third inning.

The next time was merely a double, and Arrieta was pulled so Zach Phillips could try and control Hamilton. Hamilton fouled off a sinker, and then Phillips left a slider high and out. Hamilton deposited it over the centerfield wall to set the stage for history.

In the eighth, facing Darren O'day, it did not look good for Hamilton. He fell behind 0-2 after chasing a fastball very high, and fouling off a slider inside. He got to see another sinker, though, and O'Day left it over the plate. Hamilton lofted it deep over the centerfield wall, Dave Barnett's voice made it clear where it was headed, and every baseball fan who tuned in got to see something more rare than a perfect game.

That is the factual account of what happened; what you would have seen with your eyes if you were watching. Hopefully you were watching, because the feel was something incredible that is difficult for words. We've gotten magic from Josh Hamilton before, but it's not like it ever gets old. Everyone watching -- probably even most Orioles fans -- was pulling for history, knowing in the back of their mind you rarely get to see it when you hope for it, and Hamilton delivered. He extended his arms and brought forth the incredible.

He made it seem as though there is no possible way this season can't be something even more special than the past two.

He's not the only one, either. He definitely stole the show, but he had a great assist from the Rangers' Future Hall of Fame shortstop. I liked how Lone Star Ball poster FirebatM3 put it in the Game Day Thread:

Elvis Andrus is the Silver Surfer to Josh Hamilton’s Galactus.

All four times, Hamilton followed up with a home run. Hamilton had eight RBIs, Andrus had four runs scored. It was like some sort of fantastical baseball teamwork.

Meanwhile, Neftali Feliz was delivering on the dreams many Rangers fans have had about him for years. Feliz's stuff was not just nasty, it was hilarious. He had 16 -- SIXTEEN!!! -- while finding the zone with ease. The changeup was the shockingly-effective pitch he flashed in his very first start. All told, the results were eight strikeouts, two walks, and one earned run allowed.

There were gripes, starting with efficiency. Considering the time spent in the strikezone and the bats missed, it could have just been poor luck and/or good battling by the Orioles, but he took 105 pitches to get through six innings. Secondly, with a fastball averaging nearly 96 miles per hour but dropping precipitously in the late innings, he seemed to be laboring after pumping incredible velocity early; which was the exact observation some had about his previous start.

Still, the result was a good start. Maybe going all out for six innings and then trusting the bullpen is the way things will be best with Feliz. Or, maybe he'll get better at his pacing and efficiency while still keeping that absurd stuff, and become the ace we all hoped for. That would be nice.

The bullpen was not so nice tonight, but in a game where there was no reason to care, really. In 30 games, this season has already packed in some of the better times this franchise has known (which is saying a lot lately).

Don't worry about where Hamilton will be in 2013, that is for the excellent Texas front office to handle. They know when to put aside emotion and make the tough decisions. What you need to worry about is savoring every incredible Josh Hamilton moment like tonight. You don't get to see a player who can do the things he can do very often.

Now if you're reading this and didn't watch the game, go watch the replay. This had to have been seen to be believed. 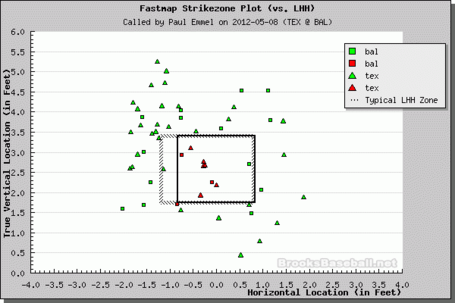 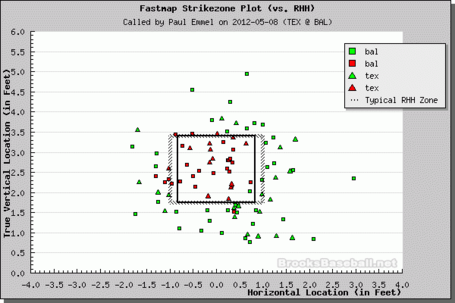 *Pat Seerey, Chuck Klein, and Mike Schmidt accomplished the feet with the help of extra innings. Lowe and Delahanty came prior to the modern era.