Brandon Snyder leads an offensive outpouring in his return to his old home stadium.

Still panicking about the Texas Rangers?

When a game is 7-0, you have natural fantasies about just how huge the margin of victory could be. That's where the Rangers found themselves midway through the sixth inning, before the Baltimore Orioles finally punched out three runs over the next two frames. 7-3 is nice, it's just disappointing to only win by four when you're up seven.

So, to make us all feel better, the Rangers scored seven runs in the ninth. In an inning that included a double play!

So, if you were panicking about the offense ever being "on" again, you can stop for one night. Every Ranger starter had a hit -- most of them multiple hits -- for a 19 hit/four walk effort. A night after two intrepid SB Nation authors talked about Elvis Andrus's improvements at the plate, he himself had three hits and two doubles on some excellent contat.

If you were panicking that Matt Harrison suddenly sucked again, instead of simply being capable of a bad start, you can stop for a few more nights. Harrison had excellent location, inducing a sick 12 ground balls and just one walk surrendered, to help get around just four swinging strikes and a fastball only sitting around 90 mph. He threw a pair of fat fastballs that got knocked for home runs, accounting for all of the Oriole runs, but he was efficient and in control otherwise.

And if you were panicking about the bullpen, something is wrong with you. Alexi Ogando struck out two in the eighth, and Mark Lowe struck out all three batters he faced in the ninth, for a combined perfect relief appearance; not exactly something new from this squad.

Tonight -- for one night only -- though, this recap is about Brandon Snyder. Because Brandon Snyder does not get to be Man of the Hour often. Or, like, ever. Snyder faced his old team for the first time, playing third while Adrian Beltre continues to regain his health, and was some kind of legend.

In the second, Snyder came up with runners on second and third with two outs in a scoreless game. Brian Matusz's first two pitches were called balls, and Snyder took the next two pitches in the zone to even the count. Pitch four was a slider very much over the plate. I guess since he took it, Matusz figured he'd try again, with the same just a tad lower and somewhat more inside. Snyder made that look as dumb as it sounds by flicking the ball for a line drive to shallow centerfield, bringing home both runs. Snyder began the scoring, making it 2-0, and taking Texas's chances of winning from 50.9% to 67.3%.

Matusz managed to retire Snyder in his second at bat, but his third would be the last hitter Matusz faced in the game. With runners on first and second and no outs in the sixth, and his team up now 4-0, Snyder quickly fell behind 1-2. After taking a curve ball high, though, he managed to foul off a cutter in on his hands to stay alive. On 2-2, Matusz threw yet another slider over the plate.

Brandon Snyder really likes Brian Matusz sliders. This one ended up even more poorly for his old teammate, winding up a couple rows deep in right center, wedging Adam Jones's glove in the wall, and prompting this face from Buck Showalter: 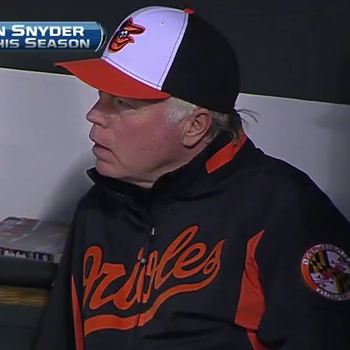 Oh, but Snyder was not done. With runners at the corners and no outs, Jason Berken threw Snyder a four seam fastball low than Snyder fouled off. He followed it with a two seamer low than Snyder knocked for his second single, bringing home the 10th run of the game, and moving the win expectancy from 99.9% to something that rounded up to 100%. Snyder made the game officially over!

Three hits, a home run, six RBIs, and 19 percentage points of win probability added, all in one magical game. In one night, Mr. Snyder, a back-up first baseman, an after thought to most baseball fans -- even of his own team -- had produced as many home runs, and only one fewer RBI, than Albert Pujols had so far; and Snyder is not being paid $250 million.

So here is to you, Brandon Snyder. You have provided Texas Rangers fans with a moment that can be remembered in a season that will hopefully end up worth remembering forever.

Congratulations on the night of your life! 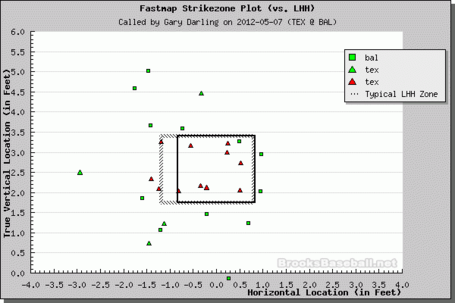 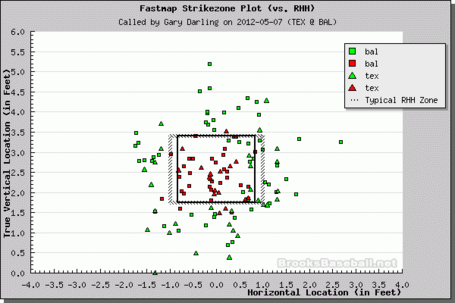