Share All sharing options for: Texas Continues To Slump With Cleveland Loss

It was just Wednesday that the Rangers hadn't lost consecutive games since August. Now they've lost three in a row. They've been outscored by 10 runs in that stretch, thank you mostly to the starting pitching looking really bad.

The Rangers are a very good team. Expecting them to go a whole season without a glum stretch or a losing streak was a bit optimistic, and now that they're in one there is probably not much reason to be too upset about their future (unless you were expecting 120 wins or something).

Similarly, Colby Lewis is a good pitcher, but expecting him never to be hurt by deep fly balls is a bit optimistic. He has a problem with them, and he will always have a problem with him. In his career since returning from Japan, he has managed to be a good pitcher despite those fly ball issues because of his ability to avoid walks with fastball location and miss bats with a stupid awesome slider.

He will still have games like this. Lewis was doing the throwing strikes thing just fine (68% of his pitches, just one walk), but not the missing bats thing (only three whiffs, all on the slider). The fastball velocity that is ever his concern was especially disappointing Friday night, topping out at 89 and sitting below 88 miles per hour. Not missing bats resulted in only a pair of strikeouts, and without missing bats, he allows balls in play. And when Colby Lewis allows balls in play, they tend to go very far in the air more often than you'd like.

Those fly balls made tonight's game for the Indians. Shin-Soo Choo hit one that left the park after a cheap ground ball put a runner on (2-0). Jack Hannahan hit another that at first looked like a triple off the wall, but a mere triple would have been lucky (3-1). Travis Hafner knocked one deep enough to sacrifice a run home after two more ground ball singles (4-3). And finally, the game was pretty much put away when Johnny Damon knocked one over the head of Josh Hamilton to triple home two more runs (6-3). It was a play Hamilton could have made -- and a play you might expect Craig Gentry to make -- but it was nonetheless a long fly ball off a Lewis pitch, resulting in runs.

Two in five balls hit off of Lewis went in the air, and four of them were the reason the Rangers lost again. If you're looking for something positive from the start and you've just checked the box score, don't bother; this was the case of someone performing almost exactly like the line says he did.

Of course, you'll also see three runs scored from the Rangers in that line. Three runs is not really enough to expect to win even if Lewis were to pitch fine. There was a little bit of poor luck in there, with Texas making solid contact against Cleveland pitching and just finding gloves (most annoyingly a great catch by Choo to end the game), but not a lot of that; not enough to win this game without some good luck.

What really killed them were a pair of brutal double plays.

Immediately after Eric Nadel mentioned Scott Coolbaugh had worked on Nelson Cruz's swing and decided he was okay, Cruz went after the first pitch he saw. He grounded that pitch meekly for a double play. There was one on and no one out in a 0-0 game in the second, and Cruz immediately turned it in two outs and bases empty. Cruz had an RBI on the day, but still continues to look completely depressing at the plate.

Worse was someone who is not so depressing. An average team should expect to score a run or two with first and second and no outs; a team like the Ranger should probably expect 2+. That is the situation Ian Kinsler saw in the seventh, with a chance to make it a game. Instead, he grounded in to a double play, dropping the situation to one where teams usually aren't going to score at all. A brief glimmer of a game ended with a sad swing of the bat.

Kinsler was hitless, with three ground outs. Despite only three runs, he and Alberto Gonzalez were the only starters not to reach base. On the subject of awful performances in high leverage, Josh Hamilton wasted a valuable runner in the eighth inning by trying to steal second, and getting thrown out by a mile while Michael Young struck out. One run isn't going to win the game; avoiding the double play is nice, but that was. . . questionable.

Oh well. Being a Texas Rangers fan is not a whole lot of fun over the last week or so. The last two years, they've had stretches longer than this where I've started to write something about how maybe the Rangers aren't really that good. Learn from my mistake: the Rangers are really good. They are still way up on their division, and more so the team most likely to catch them in their division. They still have by far the best run differential in the league. They just went 9-6 against one of the toughest stretches an AL team can face. They will almost certainly right the ship and continue to be awesome. It will probably start as early as tomorrow.

They will also almost certainly have stretches like this over the long season. We just have to deal and wait for the better days.

Biggest Play: With runners on first and second and no outs in the seventh, down 6-3, Ian Kinsler grounds to third for a double play (-20% win probability added). 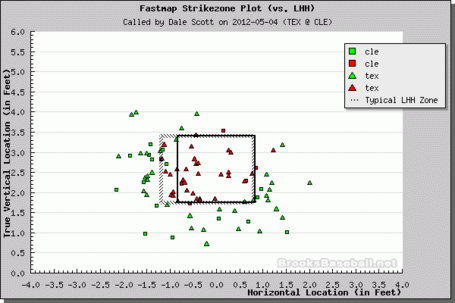 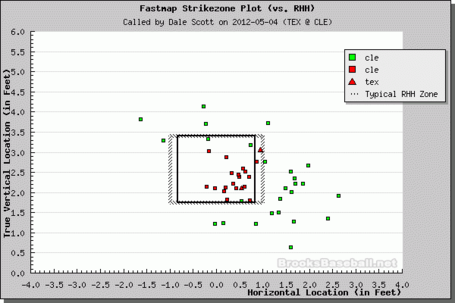