With a ton of Matt Harrison ground balls and timely home runs, the Rangers continue their winning streak.

Thanks in large part to Matt Harrison and a 4-2 series opener against Seattle, they're back to doing that with a modest four game winning streak.

Harrison got back to getting his fastball down in the zone beautifully, inducing an awesome 13 ground balls from the Mariners. His sinker not only got harmless contact, it even garnered four swinging strikes. Coupled with the ground balls, he found the strike zone on a third of his pitches, and the result was super efficiency. No walks, five strikeouts, and just 98 pitches needed to work eight innings.

With that, Harrison's ERA (4.41) and FIP (3.64) each dropped by 0.3 runs on the game, and his resume looks like a fairly respectable pitcher. He's not going to be getting Cy Young votes any time soon, but there are years where we would be begging for someone this good in the rotation. The fact that Matt Harrison is something to complain about is a tremendous statement on the quality of the Texas Rangers' starting rotation.

It's fortunate he was on, since the offense was not tremendously impressive on the night. Not horrible, either, but without the timeliness of a (mammoth) three-run Mike Napoli home run in the sixth, we are likely still playing baseball right now. Lone Star Ball's Brad mentioned it being the first confident swing he's seen out of Napoli in a while, and I cannot immediately disagree with something. It's tenuous to explain problems away as "confidence," as much as people like to do it, but Napoli really has seemed to be uncomfortable at the plate. Tonight, for one appearance, he looked in charge of the game, and it was sweet.

4-2 over an insignificant team is largely mundane. There was no incredibly great performance, though there was not a whole lot worth complaining about, either. Even over the Seattle Mariners, though, a multi-run victory is nice, and that is the way the Rangers usually win.

Texas is averaging a multi-run victory.

Biggest Play: With one out in the sixth and runners at the corners, Mike Napoli homers to make the game 4-1 (21% win probability added). 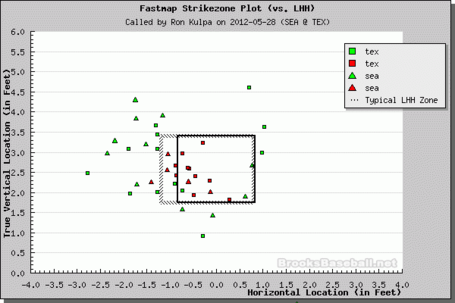 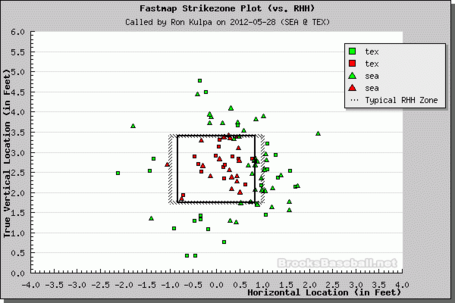 Rangers Vs. Mariners: Texas Gets Smacked Around In Series Finale