Rangers Return Ready From Day Off

Ranger pitching takes advantage of a generous zone while Blue Jay pitching cannot do the same.

Share All sharing options for: Rangers Return Ready From Day Off

It has been discussed that, when the Rangers lose during their recent "slump," they often lose close. Meanwhile, they retain the ability to win big. Because they are really good.

After getting a day off and returning home, they flashed their win big muscle against Toronto, and served notice they would be doing so in a glorious first inning.

Derek Holland set the tone in the top half by pounding the strike zone, throwing just five balls in 16 pitches. Kelly Johnson, Yunel Escobar, and Jose Bautista came up, and all three walked back to the dugout after a strikeout. This was a sign of things to come.

The bottom half tone was set by Ian Kinsler, without even getting a hit. After hitting a 2-2 count, Kinsler fouled off an epic seven pitches, wearing out Brandon Morrow before he had even really started, finally working a walk after an awesome 13 pitch at bat. Elvis Andrus only needed five pitches to work a follow-up walk, and after Josh Hamilton flew out, the Rangers began to pound the starter.

A single from Adrian Beltre brought home the middle infielders (advanced on some great base running). A single from Michael Young and walk from David Murphy loaded the bases, and Nelson Cruz cleared them with a double. Mitch Moreland singled home Cruz, and the Rangers were winning a 6-0 game with a dominant starting pitcher before the second inning had even started.

For good measure, they continued to pour it on, of course.

Derek Holland followed up a disappointing previous start with a reminder that he can also dominate a team when he's on. With a bit of an assist from a generous strike zone, Holland was able to throw 75 of his 105 pitches for strikes, getting nine strikeouts in his seven and a third innings. His lone run allowed while in the game came on a 3-2 curveball left perhaps a touch too high against Edwin Encarnacion for a solo home run. His lone walk came after coming in to the seventh after throwing 98 pitches and sitting for a long inning, which resulted in a second run on his head after Mark Lowe let it score.

Holland was absolutely helped by Eric Cooper's large zone, but he only had a couple of unreasonable strike calls in his favor (coupled with fairly consistent calls on the edges). That's how you get nine strikeouts despite only six swinging strikes, but you can't entirely dismiss a 9:1 K:BB performance with two earned runs on five hits because of a big zone. He still commanded the zone he was given, and still avoided much strong contact. A smaller zone would likely have hurt Holland, but it would not necessarily resulted in a bad start.

It's not like the big zone helped Blue Jays pitching, either. Given a ton of space to protect, the Rangers still worked a very-sexy seven walks on the day, three from Andrus. Andrus and David Murphy were the only starters without hits, and Murphy had a pair of walks himself. Texas produced eighteen hits, three each from Adrian Beltre, Michael Young, and Mitch Moreland, and four from Nelson Cruz. With all that offense from so many recently-disappointing sources, Yorvit Torrealba had to chime in with two of his own, joining Cruz and Hamilton among those with home runs.

All that despite a pitcher's zone. Young's hits were all mere singles, but with his first couple of months looking like he might finally be aging, beggers can't be choosers. Cruz's four hits were more emphatic, with a double, and a seventh-inning, two-out grand slam to punctuate the Ranger scoring in an eight RBI outing. Both even had a couple of tremendous plays in the field for good measure.

Just as Derek Holland maintains a ceiling of dominance despite a sad outing now and then, the Ranger lineup maintains a ceiling of destruction despite a flailingly poor showing now and then. And despite their record over the last month's worth of games, they hit those ceilings more often than they fall to those floors. And that is why they are the best team in baseball.

It's just nice to see them play like it again.

No thanks to Mark Lowe, Texas becomes the first team tonight to surpass the +90 mark in run differential on the season. For reference, the St. Louis Cardinals are second in baseball at +62. The team the Rangers just stomped is second in the AL, 66 runs behind.

Biggest Play: With one out in the first, Nelson Cruz doubled to clear the loaded bases, giving Texas a 5-0 lead (11% win probability added). 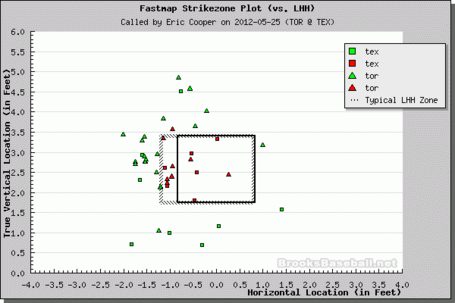 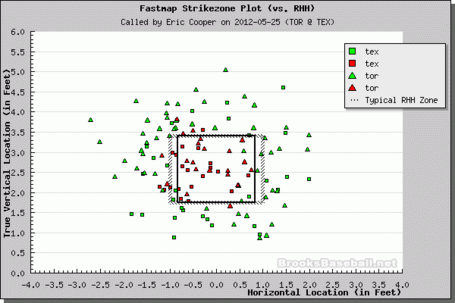