Yu Darvish continues to impress, this time in a game between first and second place.

Share All sharing options for: Yu Darvish Paints Another Masterpiece

Jemile Weeks opened the game with a double.

After advancing to third on a Collin Cowgill ground ball, Weeks scored on a Josh Reddick fly ball.

That was the last time the A's scored off of Yu Darvish Wednesday.

The superlative tank is running dry. Darvish is just starting to achieve -- if not surpass -- his lofty expectations nearly every time out. Almost literally nothing following the Weeks double was hit hard; solid contact against him seems impossible. He induced nine ground balls to go with seven strikeouts, essentially rendering 16 of the 28 batters he faced in to something worthless, even without considering how most of the fly balls were.

Of course, it was the Athletics. The Oakland offense is awful. Still, it's not so awful this start wasn't impressive. For example, Oakland strikes out a lot, 21.2% of the time. But they struck out 25% of the time against Darvish. They're actually pretty average at whiffing, doing so 8.4% of the time, but swung-and-missed against Darvish more than 11% of the time Wednesday. And those obscene ground ball numbers? At 39.1%, Oakland has the lowest ground ball rate in the American League, actually. Against Darvish it was 47.4%.

The only real difficulty he faced came in the sixth after walking Weeks. With Cowgill up, Darvish went up 0-2 after busting him inside with a pair of two-seam fastballs. After wasting a fastball low, he induced a quiet ground ball off a slider away for a double play, ending the threat. This was the most nerve-wracking portion of the evening.

If there was an issue, it was efficiency. Darvish managed six swinging strikes on his four seam fastball, a pitch that has often not really been great despite some great starts in spite of it. Still, he had trouble locating it, and thus struggled locating overall with just over three out of five pitches finding the zone. Overall, Darvish has been simply average in terms of pitches per batter, keeping him from going the distance even in games where he only allows six baserunners.

That lack of efficiency resulted in Ron Washington and Mike Maddux running him out with 101 pitches for the eighth. Even after walking the first hitter, he stayed in. Some tremendous defense by Adrian Beltre and Nelson Cruz bailed him out, before a single finally kicked him out of the game. The result was even more unnecessary pitches on his arm and little to show for it. It's nice to save the bullpen, but it's even nicer to save the young stud pitcher and the three run lead.

These are all small gripes, though. Darvish was almost completely dominant against Oakland, and has already been terrific in his young career. If he actually manages to turn that four seam fastball in to a weapon he can locate, the results could be incredible; a cascading effect of not only destroying even more hitters with his breaking balls, but going deeper in to games without huge pitch counts.

For its part, the offense managed to get four runs despite more than two-thirds of their at-bats resulting in ground balls. Five of their nine hits were infield singles, and an Adrian Beltre opposite-field home run -- following one of those singles, from Hamilton -- was the only resounding hit in the game.

It was all Texas needed, though. Darvish was spectacular as mentioned, and Mike Adams and Joe Nathan -- who is suddenly making early-season concerns look laughable -- struck out every hitter they faced.

Texas's ace of the present and future took the mound in their first battle with the AL West's second-place team in 2012, and the results should be enough to have every Rangers fan grinning from ear-to-ear over the present and the future.

Biggest Play: Adrian Beltre follows a Josh Hamilton infield single with a home run to right field with no outs in the fourth, making it 2-1 Rangers (18% win probability added). 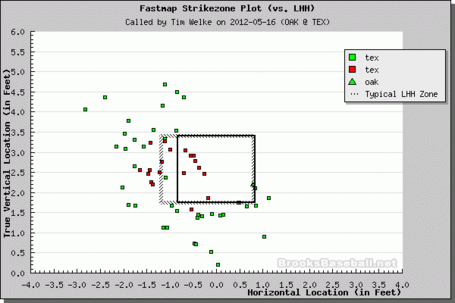 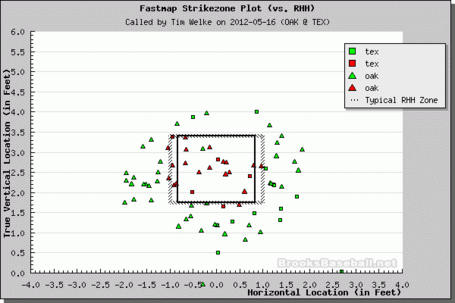