Colby Lewis lacks the fastball to give a rest-day lineup a chance.

Colby Lewis manages to get by -- and in fact excel -- despite a lack of overpower fastball velocity. He does it by locating his fastball excellently to get ahead and set up an incredible slider.

Tonight, he did no such locating. If you take a gander here, you'll see no fewer than five pitches placed in the center square knocked for "in play, no out." That there makes up the bulk of the Kansas City offense Tuesday evening. Even the velocity was down, as well, averaging under 88 miles per hour on the fastball, and garnering just three swinging strikes.

As has been the case when he's struggling, the amps on the heater were not there early, and early is exactly what cost him. His own error extended the first inning, and some very hard-hit balls combined with a hit-by-pitch to put the Rangers down 4-0 before they even got to come to the plate.

And without locating his fastball, he couldn't use his slider effectively, only getting two swinging strikes on his most lethal pitch. He was sort of okay after the first. No great shakes, but a pitcher who will usually win a game with Ranger run support. He just concentrated a lot of awful in that first inning, and effectively ended the game before it started.

The offense lacked Elvis Andrus and Nelson Cruz, but still managed four runs, and could have scored more with some favorable wind/slightly better contact. With two outs in the first, David Murphy launched a ball to the centerfield wall that would have made the game 4-3 had it gone a couple feet farther. In the fourth, Adrian Beltre sent a ball to the centerfield track with a runner on first, nearly making it 6-3. Hamilton later scored, but that was four just-missed runs through the first four innings in a game the Rangers lost by three.

Hurts, huh? To add insult to injury, Hamilton hit his own near-home run in the fifth that only ended up being a sac fly. Make it five just-missed runs.

Meanwhile, if Colby Lewis makes a simple play to first base in the first inning, he gets out of the inning without allowing a single run, and perhaps the face of the game is entirely different. The way things went, it's hard to imagine, but this was not a total implosion. Which is not to say this was some case of the Rangers getting particularly unlucky. They could have won this game without much going differently, but then they would have been lucky. Instead, they lost when they were outplayed. They lost because they struck out five times against Kansas City reliever Tim Thomas in two innings.

On the plus side, the bullpen looked good (again), with five total strikeouts, no walks, and no runs allowed by Alexi Ogando, Joe Nathan, and Koji Uehara in three and a third. Too little too late, though, as the Rangers only managed to pull to within a save situation after a pinch-hit home run from Brandon Snyder with two outs in the ninth.

So now Texas has been swept in 2012. Only in two games, which shouldn't really count, but oh well. Ron Washington chose to sit some of his best players in the series, started his spot-starter, and Pitcher Least Likely to Return didn't have his stuff available. It happens, and it's really frustrating, but nothing was said about the Texas Rangers that we didn't know, and thus we still know they are a fantastic team. As far as benching starters in clumps, it is not very fun, but the manager who does it now has two AL Championship rings on his finger, so maybe he's on to something.

The Rangers are now -- hopefully -- nice and rested to begin destroying worlds again. 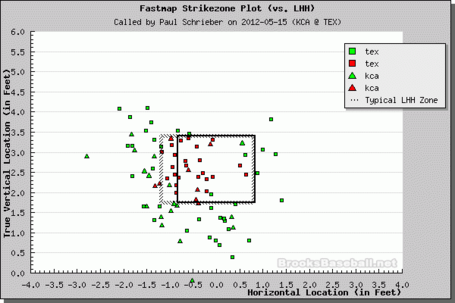 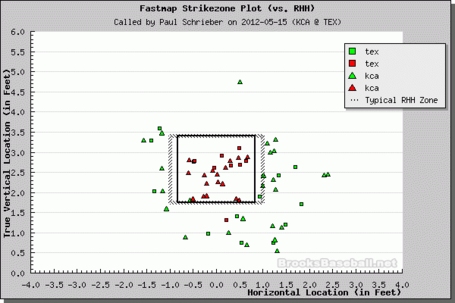 Rangers Vs. Royals: Texas Falls To KC, 3-1, In Series-Opener