Share All sharing options for: Melt Down. Come Back. Heart Break. Rangers Lose To Blue Jays

Okay. That was a really very ugly game.

This is the kind of game where it can be fun to look at the win expectancy chart (you'll find one below), seeing the massive swings, and going "oh yeah, that is what that felt like." Except, in this case, it is not fun, because the game was awful.

The Rangers had a furious late rally to tie the game rendered irrelevant by a walk-off home run. A rally itself necessitated by a massive collapse. It's hard to imagine a more unpleasant thing to watch. If you get killed, it's a worse sign for your team, but when you're actually watching it, you can just turn it off and get ready for the next day.

A game like this, you tend to watch in abject horror as every painful moment unfolds; every painful turn exacerbated by how thrilling the one before was.

Neftali Feliz was staked to a 5-0 lead thanks to a five run Ranger second, and that's where someone writing a recap of the game starts thinking of another way to say "Rangers win big again with total team effort." The win expectancy peaked at 89.8%.

It wasn't enough, as he allowed four runs in the third, and couldn't finish the sixth. He struck out four, but he walked six. He didn't allow a lot of line drives and had plenty of ground balls, but he also had a lot of deep fly balls.

The stuff was there, with a fastball averaging better than 95 miles per hour, and with a ton of movement (which may have been why he threw it for strikes well under half the time). He had nine total swinging strikes in just 87 pitches, but just could not command anything outside of his slider (which looked incredible, to be fair).

An inability to get ahead with his fastball killed him. Let's look at his location in that awful third inning real quick, though.

When he faced Colby Rasmus with one out in the third, he hadn't yet walked a soul. Looking here, balls two and three were definitely strikes -- two falling entirely within even a reasonably small strikezone -- and ball four was probably a strike. That extended the inning and the pitch count. Jeff Mathis followed up, and even though he's Jeff Mathis, no pitches were particularly close.

After an out, Kelly Johnson's first pitch was a change-up high and over the plate. It barely cleared the wall, even still, a bad pitch, but also some bad luck. Now it was 5-3, and along came Jose Bautista. Bautista got two sliders in the center of the plate, and the second was taken super deep to make it 5-4; big lead gone.

So the third saw awful pitching from Feliz, but we all should be expecting some growing pains. Even still, if Rasmus isn't walked on one or two actual balls, things are completely different. There is probably at least one fewer run, Feliz doesn't have to throw so many pitches in the inning, and maybe he doesn't find so much of the zone because he hasn't been recently squeezed. To say nothing of Johnson's home run just barely hitting the top of the wall.

None of this is to say Feliz pitched well, he didn't. The other five walks were nowhere close; the command wasn't there. His velocity declined noticeably after routinely hitting the high 90s in the early innings, which could be a sign of poor pacing. But this is simply a case study in how the runs allowed aren't all on the pitcher's performance. If Craig Gentry can get to Johnson's fly ball, or if Rasmus strikes out, Feliz probably goes deep in to the game only allowing a couple of runs, and we all sing his praises until someone points out he didn't pitch as well as that looks.

Hopefully, he'll learn; he's already had good games as a starter, no reason to assume he won't ever again because of some command issues in Toronto.

Speaking of more to runs being scored than the pitcher, Alexi Ogando coughed up the lead, but it was helped by some awful Ranger fielding. Elvis Andrus's first error of the season allowed the lead off runner to reach, and two were on after a ball just skipped past him in to the outfield. Mike Napoli failed to field a bunt attempt, and the bases were loaded with no outs. Jeff Mathis grounded to Alberto Gonzalez, who tried for an impossible 5-4-3 double play, instead of getting the lead runner at home, making it 6-5. Another ground out and a single and the game was 7-6.

Ian Kinsler, Elvis Andrus, and Michael Young all singled with two outs in the ninth to tie the game, but Mike Adams couldn't retire one hitter. Brett Lawrie put Texas out of its misery with solo shot; fittingly, just off the top of the wall.

Aggravating. On one hand, the Beltre-and-Hamiltonless offense was fine, but on the other hand maybe Beltre or Hamilton help bring home an extra run to change the game. The first year starter was probably going to have a really bad game somewhere. The bullpen can't always be lights out. None of these words make watching it any more fun.

The upside is easy: we learn a lot less from one ugly game than we do from the 23 awesome games before it, and baseball always gives you another chance in short order.

I assume no one is even reading this. Who wants to read how annoying a loss can be? 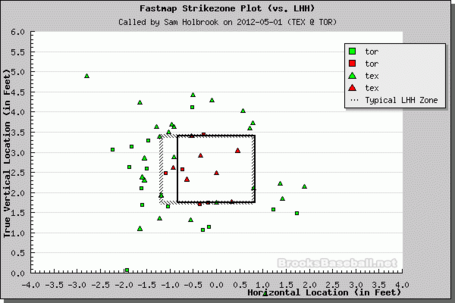 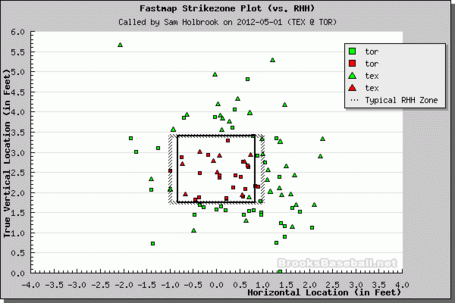