The Rangers were full of great signs Monday night, including from their rookie pitcher.

There is no getting around the fact: it was bad.

Yu Darvish, perhaps the most hyped rookie in franchise history, made his debut against an offense that will surprise people if it even makes it to mediocrity. And it started out pretty poorly.

Darvish's first inning in the Major Leagues took 42 pitches. Just 22 of those pitches were strikes. He walked three. He threw a wild pitch that was a lucky bounce from allowing a run. He couldn't put anyone away, and allowed four base hits, and four earned runs.

His career just begun in the states and his team was already behind, and he was not looking too impressive. He settled down from the first, allowing just one more run, and even retiring 10 in a row from the fourth on, allowing him to nearly finish six innings, before a walk and a single ended his game one batter short.

Still, the strikes weren't coming, even in the midst of that streak. Less than half his pitches were strikes in the fourth inning, despite going three-up-three-down. He seemed to be insistent on trying to get the umpire to call the low strike. Plenty of pitches were in the rule-book zone, but as we well know, Major League Umpires do not care.

Beyond simply not taking too much out of one outing, though, there were good signs within even an awful performance. Many of the singles that set up runs were not particularly hard hit, falling just in front of Rangers fielders. He struck out five. He had 10 swinging strikes, topped 95 on both his two-seamer and four-seamer, and produced more ground balls than fly balls. These are all more powerfully good signs than five runs allowed is a bad sign. Heck, he had 7.94 ERA, but only a 3.57 FIP. The stuff was there, the velocity, the movement, and the ability to miss bats and get balls pounded in to the grass.

The location just wasn't there. That's much more easy to believe as something to be improved upon than stuff would be. This was a bad start, there is no arguing against that, but it was nothing at all to panic over.

On the other side, you don't too often see an early 4-0 deficit turn in to a blowout victory, but the Rangers are simply way better than the Mariners are. When that's the case, these things can happen.

In the first inning, Brendan Ryan failed to turn an inning-ending double play, which was followed by two lucky Rangers hits making it a 4-2 game. At the time, I made note of this, waiting for it to be significant should the Rangers come back. They did come back, it just wasn't significant.

After Darvish allowed his fifth run, Nelson Cruz sent a two-out pitch in to the seats for a game-tying home run, and the Rangers never looked back. A Mitch Moreland two-run blast in the fourth gave the Rangers the lead, an ensuing Josh Hamilton shot in the same inning padded it, and another three-run homer by first-four-games MVP Ian Kinsler simply made the game a laugher.

There were also 3.1 more fine bullpen innings, with Alexi Ogando and Mike Adams looking impressive again, along with Scott Feldman, shutting down the Mariners the rest of the way. The Rangers' bullpen thus far has allowed just one earned run and one walk against 11 strikeouts. It's nice when expected strengths become actual strengths.

With the victory, the Rangers overtake first place. Obviously that's going to keep up. 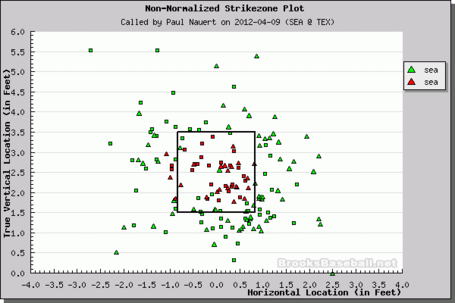