Texas fell short in terms of runs, but that doesn't mean the offense didn't show up.

Baseball do what baseball do.

That is literally the best way to describe Attempting Baseball 2012 Attempt No. 2 for the Texas Rangers.

As Adam Morris said immediately after the game, "you aren't going to win many games when you score only 3 runs." He's completely correct. By the same token, you aren't going to score only three runs when more than a third of your balls in play are line drives, you have at least as many fly balls as ground balls, and you put 12 base runners on over the course of the game. You're going to score more than 5+ runs in that case most of the time.

And some times, instead, baseball will do what it do, and you will score only three and lose the game. That is what happened to Texas in game two. Then you have to consider Chicago only scoring a run in the first inning because one weak hit found the outfield, and another weak hit dropped in front of a fielder. Or hard hit balls by Adrian Beltre and Michael Young just turn foul. Or one of the best hitters in baseball failing to bring just one of the four runners on base home when he had a 3-0 count. Or the game-winning run being just inches from the glove of Josh Hamilton.

Whether this all makes the game more or less frustrating is up to the individual, but this was not a case of Texas playing poorly, it was simply a case of stuff happening. Or not happening.

There are a few potential gripes that probably need to be headed off at the pass. First, the Joe Nathan experiment is no more a failure because of Saturday than it was a success because of Friday. Nathan still managed a strikeout and an easy inning after a wall-scraping home run. The pitch to Rios was an awful, flat, mistake fastball, high in the zone. It will not be his last mistake, but we have plenty of time to see if it is one of many or one of few.

Second was the Napoli plate appearance in the eighth. With the bases juiced, he worked a 3-0 count, and looked to be walked on pitch number four. Moaning from the crowd -- in person and on the Internet -- ensued, but this was a time the umpire might not deserve a bunch of criticism. 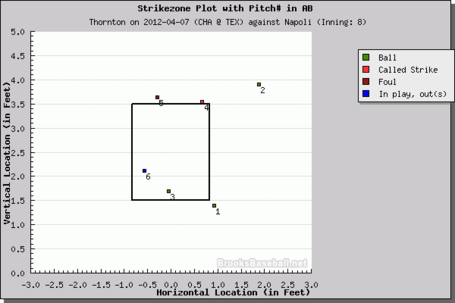 Pitch four, top right corner of the zone, is the one in question. Considering that square is smaller than an actual baseball, and that is the top of the zone and baseballs travel down, that sure looks like a strike. Pitch three also could have been called a strike, though rarely will it ever be. This was -- for good or ill -- not a case of the umpire screwing up, but rather a case of Mike Napoli failing the Rangers. For once.

Speaking of pitch tracking 72 of Derek Holland's 93 pitches registered as a sinker. Fully all of his fastballs. Whether that is a glitch, a one game phenomenon, or something new we will get to see soon. Holland struggled in the third, allowing two walks to score on a double, but was very good otherwise. His pitch total was under 18 every inning outside of the third, and he managed five strikeouts, no additional walks, and an impressive 10 swinging strikes.

Perhaps most importantly, he had the Bad Dutch inning that has plagued him before, but kept the damage relatively low, and recovered to have another set of strong innings after. It was not domination, but this kind of start most days would be fine from Holland, as long as the other days have more good than bad. 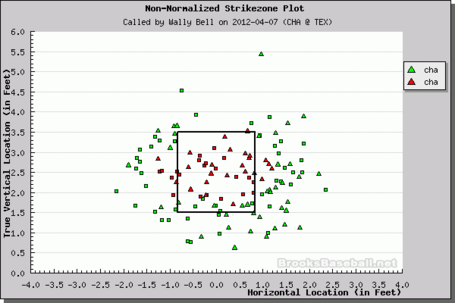