Texas Rangers Game One Thoughts And Analysis: Already With The Bunting?

Share All sharing options for: Texas Rangers Game One Thoughts And Analysis: Already With The Bunting?

No matter how much we actually know that a single game in a baseball season is just a grain of sand in a beach of games, it is difficult to treat Opening Day as just another game. It is the first time a baseball game has mattered in months. A win means a 1.000 record, and a loss means 0.000 (exactly, you can look this up). Even if it's not true, and we realize it's not true, we feel like a win is the start of something great, and a loss is reason to panic.

There is not a single thing wrong with that, especially when the result is the former.

For the fourth straight year, the Rangers have started the season off with a winning record, and the last two times it's worked out pretty well.

In 2012, it was thanks to the pitching; the pitching so many hope and expect to be a major plus for a franchise that hasn't got to say that too often.

For at least one day, Colby Lewis looked more like 2010 than 2011, actually pitching like a star at home. The boxscore says two earned runs over six innings pitched, but he was better than that. Nine strikeouts in six innings, against just one walk, is absolutely dominant, and even that doesn't cut it. 70% of his pitches found the strikezone, and of the 100 pitches Lewis threw, eighteen, 18, resulted in swinging strikes! That's a huge number, folks. That is more than twice 2011's MLB average, against a team that was actually better than average at avoiding whiffs. That is an extreme level of dominance.

The stuff looked good, as well. The fastball velocity was so much of a concern in '11, but it was there well past 75 pitches for him today, averaging above 88 and touching close to 91 on occasion. The velocity was not quite there early -- another problem from last season -- but with few bouts of trouble, that could simply have been holding himself back.

It helped that he faced a lineup devoid of much left-handed danger. The one weakness for him today, on paper, looked like Adam Dunn, and that was in fact his weakness in reality. In the sixth he did a fabulous job of keeping the ball low -- something he could have done better all day, but never hurt him before -- until he finally let a fastball stay up, and paid dearly with a home run allowed. Of course, we know just one home run allowed at home by Colby Lewis is kind of a success, and that was really his only major failing on a fantastic day, ending a shutout, bringing the game to 2-1. Just one game, again, but at the very least we know that -- hip and all -- Lewis still has this sort of performance as his ceiling.

He left a tied game, but the bullpen followed his lead and dominated themselves. Alexi Ogando showed just what an All Star starter moved to the bullpen can do, absolutely crushing his opposition, striking out the side effortlessly with four whiffs of his own. Mike Adams was just fine, himself, and for now the Joe Nathan experiment looks great, as he had mid-90s velocity and a strikeout to finish off the game.

Pitching, people. Awesome, dominant pitching. One walk and thirteen strikeouts across an entire game. The strikezone was just a touch large, but mostly consistent, and fair by Major League standards. The pitching was simply awesome.

The offense unfortunately struggled, putting together just six hits against John Danks, and looking outrageously aggressive, even by their own standards. The White Sox threw just six whole pitches in the entire game. Ian Kinsler did most of the damager himself, with a double that resulted in a run after consecutive sacrifices, and a solo shot in his first two at bats. A tie late was broken when Josh Hamilton singled, advanced on a ground out, and scored on a Michael Young ground ball that found a hole. Thus describes they entire Rangers' offense on opening day.

But hey, it was enough. Danks looked good himself, and while it would be soothing to see Texas a bit more patient, that is just not their style. On a different day, that approach will result in total destruction. The good thing is their pitching is strong enough that they can win even on the days where it doesn't.

That said, sometimes they just don't help themselves. Like when they put a weak hitter in the most valuable spot in the lineup, and then have that weak hitter willingly give the opposing team an out. There was reason to hope that an off-season would end the nonsense of Elvis Andrus bunting in the first inning, but there was no such luck. Kinsler started the game with the aforementioned double, and Andrus promptly helped the White Sox by getting himself out.

Supposedly, the call was made my Elvis himself. Which is either good, because the manager knows better than that, or bad, because the player has a bad approach to baseball. Either way, it is a bad call. The Rangers win expectancy actually went down because of it. It advanced Kinsler to third, and he scored on a sac fly, but he also could have scored on a base hit by Andrus, or the Rangers could have scored multiple runs because they didn't waste outs. Bunting there is a good decision when you only need one run, but in the first inning of a game you don't know that you'll only need one run. Maximize those odds!

The other weird, possibly negative part of the game involved the outfield. Craig Gentry came in late to move Josh Hamilton to left, bumping David Murphy out of the game. As Adam Morris pointed out, this is ample evidence the Rangers agree with every defensive metric and scout: Gentry is the better fielder. The question is why he was not out against a tough lefty, when it would make the most sense to give Hamilton a less-dangerous day in the field, and improve the defense by taking the platoon advantage. The defense matters, and we saw that when David Murphy lollygagged a soft single and allowed Alex Rios to score from first. It makes so much sense to start Gentry in these games, and hopefully the only reason he didn't is because the Rangers know something we don't, or because they just wanted to give David Murphy a nifty start on opening day.

That's enough negativity. The Rangers won. They are undefeated, off on the right foot, and all that good Opening Day stuff. People will celebrate far more than one game merits, but after last season we should all know to celebrate when we can, because if you wait until the last game of the season you might have wasted your opportunity.

So be jovial, go crazy, and throw a couch out on the lawn if you desire. It's just one game, but it's 100% of the season so far. 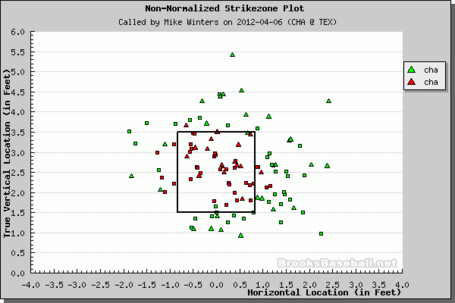