An unusual game on field and in the booth becomes a blowout because the Rangers are really good.

This was a weird game.

Through the first five innings, it was 2-1, but it was no pitcher's duel.

Colby Lewis managed to keep the Rays from ever having a single inning run expectancy above one -- which is how I'm going to talk about opportunities, rather than using LOB tonight -- and had five strikeouts, but he was not efficient in any way. He had trouble finding a strikezone -- with little thanks to home plate umpire Hunter Wendlestedt -- issuing his second, third, and fourth walks of the season, and also had trouble missing bats with just seven swinging strikes. Less than 60% of what he threw found the zone, and when it did it often looked hittable. The result of long counts and lots of balls was a high pitch count and just six innings.

But, the Rays just couldn't do anything against him. The fly balls never quite went far enough, the balls were never quite hit on enough of a rope, and despite a lack of overpowering stuff they struck out five times. A solo home run from Matt Joyce was all they could muster. To be fair, it's certainly not that Colby Lewis was bad, he just wasn't pitching as well as one run in six innings looks.

Meanwhile, the exact same could be said of Jeff Niemann. He was slightly better at finding the zone and missing bats, but not much. The Rangers had a good load of strong contact against him, but that contact kept finding gloves, or coming when there was no one on. If it weren't for a leadoff walk by Ian Kinsler followed by a double from Elvis Andrus, and a single from Josh Hamilton, Lewis would have left the game down 1-0. The Rangers' only runs against Niemann were before they'd committed an out.

Niemann, too, was inefficient, though, going just five innings. Lewis pitched a sixth, but nearly half the game was a bullpen battle. When that happened, the Ranger bats started to work themselves out, and most importantly the Tampa leather started to falter while the Rangers kept it up.

In the sixth, Andrus ranged to the second base bag on an Evan Longoria ground ball, and flipped it with his glove to Michael Young for a narrow double play. Texas leather.

That same inning, Longoria couldn't handle a hard grounder from Adrian Beltre, putting runners on first and second. After a Young double play, an error by Elliot Johnson allowed Josh Hamilton to score from third, making it 3-1. Tampa leather.

The next inning, David Murphy ran down a Johnson liner and snagged it on the tip of his glove to turn an extra base hit in to an out. On the very next at bat, he pulled down a Jose Molina drive to the wall; the two plays together probably save a run. Ranger leather.

Finally in the last half, after a pitch narrowly missed Andrus, Molina tried to pick off Mitch Moreland at third, but the ball got away and Moreland scored, making it 4-1. Tampa leather.

Tampa's overall a strong defensive team, but in just two innings we saw how huge defense can be, quite possibly playing the difference in the game. It was only made more poetic that the hitters the Rangers were robbing in the field were the fielders gifting runs to Texas.

To top things off, Joe Maddon issues an intentional walk to Hamilton after Kinsler advanced to second on the throwing error with two outs. Beltre promptly showed why the intentional walk is a really questionable strategy, sending an opposite field line shot over the right field wall without even really following through. What was a close game was now another Texas blowout at 7-1.

Elvis Andrus's first inning double, by the way, was another awesome sign of his improving power. The ball was just shy of being a home run, hitting the opposite field wall. There are, unfortunately, no reliable stats on this yet, but he looks impressively strong so far.

The bullpen was also impressive. Mike Adams allowed a run on two hits, but that was the only damage done against he, Alexi Ogando, and Koji Uehara, who each had a strikeout. Ogando had two whiffs on his slider and just looks completely unfair as a reliever. Uehara had two whiffs on his splitter, and he allowed a couple deep fly balls, but when a guy like this is one of your mop up relievers. . .

On one final note, Tom Grieve spent a good portion of the game trolling the group of fans online who have been carping about the cookie talk lately. He launched in to a massive warning before beginning the thank yous, and then carried the thank yous and discussion over several innings. It was actually kind of amusing, even if I am one of those carpers.

The thing is, people don't hate the cookie talk, they hate how much it takes over the game, particularly in key moments. It doesn't have to be in the third inning regardless of 3-2 pitches or loaded bases. It can be spread out and deployed in slow moments just fine. We don't have to be trolled for legitimate complaints. As far as the disclaimer, I like how Jason Cole addressed it:

@ggaroon Yeah, I'm thinking TV guys shouldn't be saying "you won't like this next 10 minutes, so just turn down the sound." Ha.

(Ggaroon is the father of the great Josh Garoon of Baseball Time in Arlington, by the way!)

I'll get back to baseball too, now. The Rangers are awesome. They are really, really good. They still have now lost two in a row. They still will not be swept. They now have eight wins in just the first 11 games of a 15 game stretch where eight wins total should have been enough to make you happy. Their run differential is now at +56, which still stands as the best in baseball, and better than every positive AL team combined.

Biggest Play: Up 2-1 in the sixth with no outs and a runner on first, Elvis Andrus and Michael Young turn an Evan Longoria grounder up the middle in to a double play (12% win probability added). 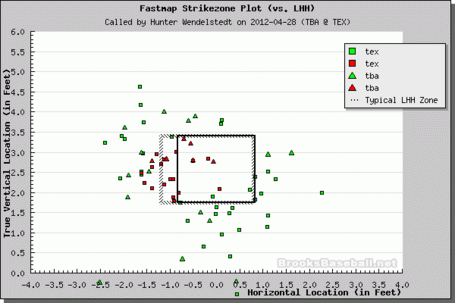 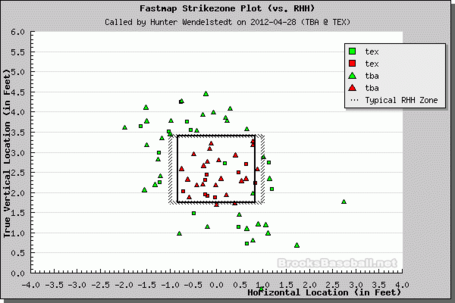