Texas suffers their biggest loss of the year, but still have plenty to be happy about.

Well, they were due a game like this. The Rangers are having an awesome season, but they weren't going to go a whole year playing every team to within at least a save situation.

Yet, there are even still positives in this, the worst loss of the year.

This game looked over from the start, with Matt Harrison being completely ineffective. After a lead-off single, Ian Kinsler couldn't handle a double play opportunity, and the Rangers were down 3-0 when Evan Longoria made them pay with a home run. Before he could even get an out, Harrison (with Kinsler's help) had his team down 4-0 with two on, and the Rangers' win expectancy at an abysmal 15.5%.

Yet, they still had their chances. That's an incredibly awful shot, and yet they were nearly tied in the eighth when Elvis Andrus battled fought off ball after ball in an 11 pitch at bat, with pitch 10 being hit just too far left of the pole missing the game-tying grand slam. A super frustrating moment, to be sure, but that is how close the Rangers came to at least tying a game where they were down six runs with 14 outs to go.

Without the Kinsler flubbed double play, the game is at least closer, if not a Ranger advantage. If Nelson Cruz doesn't get thrown out at home following a silly hesitation after a passed ball just prior to the Andrus at-bat, the complexion of the game is also notably different.

And that's the worst it's been this year. As Joey Matches said about that at-bat:

Yeah, that's true. The "worst loss of 2012" moniker continues to get worse, but it still hasn't yet been horrible, and they continue to be rare.

Meanwhile, Texas still hasn't had a game where they have failed in every aspect. The offense had just three fewer hits than the Rays, with actually a better line drive rate. Every single Ranger hat a hit, with Andrus leading the way with three. Josh Hamilton had yet another home run. The defense failed to make a few plays you'd expect them to make, but so did the Rays'. The bullpen was excellent again with four innings pitched and just one run allowed on two hits -- both off Mark Lowe. The Angels didn't even gain any ground.

What we saw was that Matt Harrison is capable of a bad start when he can't miss bats (though he still got his ground balls), and the Rays are capable of winning big. Neither of these are new or distressing revelations.

Tonight, there isn't a lot to celebrate. There's still a whole season and franchise to be happy about.

Biggest Play: Before a single out is recorded, Evan Longoria follows up a botched double play with a three-run home run, giving Tampa a 3-0 lead in the first (16% win probability added). 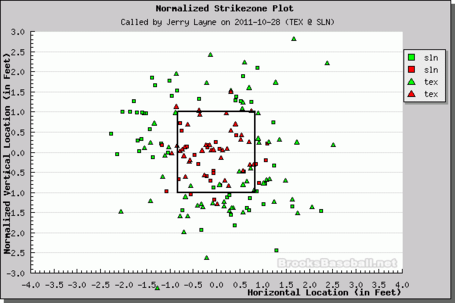