Yu Darvish has now at least proven that he can be special.

There was a time -- and it wasn't that long ago -- when two runs wouldn't be enough for Ranger pitching. The idea of a lead-off home run being all you need was laughable.

It's not laughable anymore, and Yu Darvish officially placed himself in a rotation full of pitchers we once only dreamed of Tuesday night.

10 strikeouts of the Yankees, no runs allowed, and two outs shy of a complete game. That's the line, but the greatness of the Darvish breakout goes beyond that.

The stuff was magnificent, as usual, but it was even better on Tuesday. The fastball sat around 93 miles per hour, approaching 97 when necessary. He threw a sinker at 95! Most significantly, the curve had more bite, and the cutter had more cut, and both left New York hitters looking stupid. The cutter -- which looked like something out of a video game -- produced five of his outrageous 15 swinging strikes.

Speaking of swinging strikes, so far this season the Yankees have whiffed on just under 8% of the pitches they see. If you're wondering how good that is, it's behind only the Indians for the best in the American League. It's really good. Last year, they were also the second best in the American League. The New York Yankees do not offer at pitches unless they are going to make contact with them.

Unless they face Yu Darvish. In which case, they whiff on almost 13% of the pitches they see. That's hilarious, people. That's the statistical representation of what you saw with your eyes, the number you can show to your friends and go "LOOK AT WHAT HE DOES!" He fooled people with his six nasty pitches. He fooled them badly.
We new Darvish had stuff, though. The concern through the first three starts was his command of the U.S. strikezone, and that ended up no concern at all against New York. 82 of Darvish's 118 pitches -- 70%!!! -- were for strikes. He produced nine 0-2 counts on Yankee batters, seemingly climbing ahead of them at will. He never went to 3-0 even once. And that was without a generous strikezone. He had as many as about 12 pitches that the typical MLB umpire would call strikes ruled outside, with no balls-called-strikes to make up for it. Just think of what he does if even half those are called balls.
That small strikezone indicates perhaps the most encouraging aspect of his amazing outing: the ability to adjust. He had two walks and relatively-poor command through the first three innings, though neither walk necessarily saw four balls. But, Darvish got a feel for Ted Barrett's strikezone and turned in a stunningly-accurate performance the rest of the way. He can command the zone, he has that in him. He can learn and adapt. We know all this now, and it's awesome.
When he wasn't striking people out, by the way, the ball was on the ground. 20 balls were hit in play, 13 were grounders. One of those grounders came after the Yankees sandwiched a third inning walk with two singles, loading the bases with no outs. That's a position where an average offense -- let alone the Yankees -- should expect to score at least two runs, but a strikeout and a ground ball to Adrian Beltre gave New York zero. Guys who both miss bats and create ground balls at incredible rates are rare and special. Guys who do that against stellar offenses are dreamy.
There was so much more this start than the numbers can convey. He picked himself up with a sweet scoop to the first base bag. The electrifying crowd "yuuuuu'd" for every third strike, and went crazy when they got it. It was one of those events we see multiple times a season now that make you think Dallas-Ft. Worth can become a real live baseball town. Describing it with words is almost impossible.
One start, of course, does not mean Darvish has just clicked the on switch and will dominate here on out, but at the very least we know he can do this. We know he can command the zone, and what his absurd repertoire can do when he does. We know he can efficiently go deep through a game, both miss bats and induce ground balls at a silly rate, and recover and adapt as a game moves along. We know he can dominate even perhaps the most terrifying lineup baseball has to offer. Whether or not he will do it every fifth day remains to be seen, but we know he can.
And we know he is only 25, and he is all ours.

Biggest Play: With the bases loaded and one out in the top of the third, Yu Darvish induces a weak ground ball for a 5-3 double play, keeping the Rangers ahead 1-0 (17% win probability added). 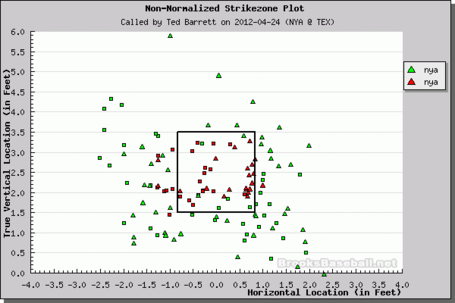