Detroit downs Texas 3-2, but there is not a whole lot to complain about, all thing considered.

Share All sharing options for: Even In Detroit Loss, Texas Still Looks Strong

When you think of it that way, and consider Texas still very easily could have won, it should be pretty hard to hold much frustration from Saturday night's 3-2 defeat in Detroit.

Frustration primarily comes from one, single inning. Justin Verlander was his typical, dominant self, striking out eight in six innings against three walks and a run allowed. In the fourth, however, a series of strong Ranger at bats had pushed him to 76 pitches.

Meanwhile, young Neftali Feliz was perfect. He began the fourth inning with just 28 pitches, and quickly retired Austin Jackson. A fastball tailed just a bit too much, hitting Brennan Boesch and ending the perfecto, but he followed up by striking out Miguel Cabrera. 4.2 innings of dominant, efficient, no-hit pitching against one of the scariest lineups around.

He quickly went up 0-2 on Prince Fielder, and then the wheels fell off. Feliz just could not put Fielder away, eventually walking him, and driving up the pitch count. As he put more work in to the inning, he got more and more wild. Delmon Young singled up the infield off an actually-pretty-good breaking ball to bring home two runs. Alex Avila walked, and Ramon Santiago singled home a third run. Don Kelly walked, and finally Brandon Inge flied out to end the brutal inning.

In one inning, he drove his pitch count to 70, walked three, and went from looking dominant to ineffective as the work load piled up.

Thing is, that was the entirety of the Tigers offense. Feliz recovered, and continued to look good all over again. He began the fifth by handing out his fifth walk, but he actually threw only one ball. He threw 60% of his pitches for strikes, even though you can find around 13 pitches that the typical umpire -- let alone the rule book -- would call a strike; including a few Justin Verlander got called. The stuff looked excellent, with the fastball topping 98, and getting a solid 10 swinging strikes. Outside of his one, awful inning, he managed to shut the Tigers down completely.

Even with that one, awful inning, Feliz managed to go eight -- a complete game in this case -- with six strikeouts, four walks, just three hits, and three runs allowed. Considering the lineup he was against, getting squeezed a bit, and pitching on the road, that total line seems just fine, and shouldn't tarnish the promise of Feliz the starter much at all. Not to be forgotten, he kept Texas from needing their bullpen while the Tigers used three innings of their own, potentially a big gain for Sunday.

That one inning was just so hard to watch. . .

Outside of that, the offense was bad, but the offense was also facing Justin Verlander. They still managed more than twice as many baserunners as Detroit (15 to 7), but just could not bring enough of them home. They had two on with one out in the ninth, but Elvis Andrus hit a ball just slightly not hard enough, barely finding the glove of Ryan Raburn instead of finding the wall to tie the game. If the ball goes just a touch farther, or if Young's fourth inning single finds an infielder's glove, Texas probably wins Saturday night.

So, that describes probably the most one-sided game the Rangers have lost all year. A one-run game they could very easily have won. On a day when they beat the Tigers 13-5. They still have at least a split, and a chance at a series victory. They still look like by far the best team in the American League. 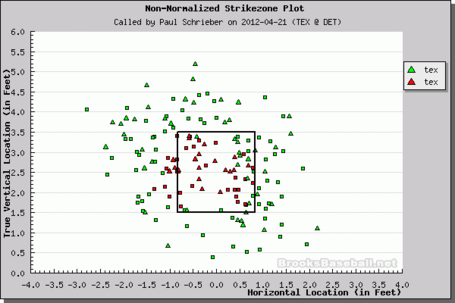 Rangers Vs. Tigers: Texas Squeezes Out A 3-2 Extra-Inning Victory, Series Win At Detroit