In their first test against a supposedly good team, the Rangers dominate the Red Sox in every facet of the game.

Share All sharing options for: The Boston Massacre: Texas Starts Series With Rout

We got all of that Tuesday night in the most awesome game the season has yet offered.

Texas was down 2-0 before an out was recorded, but from then on it was an 18-1 beat down. Once upon a time, playing the Red Sox was awful, but since midway 2010, it's been great.

Boston came in to the game leading baseball with 51 runs scored, averaging 5.1 a game. Colby Lewis and the bullpen held them to three. Lewis was fantastic after serving an early meatball to Dustin Pedroia, hitting the zone with over 67% of his pitches, and consistently locating his fastball away where the Red Sox hitters could do nothing with it. He even had his velocity topping 90 before he'd thrown 20 pitches, another nice Colbyashi sign!

And when he locates his fastball, that unbelievable slider will wreck people. Colby had an impressive 11 whiffs on the day, eight coming on the slider. That thing is amazing, guys. There were, as usual, plenty of foul balls, but he was otherwise awesome. All told that resulted in seven innings with just a handful of hard hit balls, and seven strikeouts against zero walks. Colby Lewis was efficient against the Boston Red Sox. Baseball.

So, it's nice to see Lewis looking for the third straight game like he might be more of the high tier pitcher he was in 2010, especially against a good offense.

On the other side the offense was just absolutely abusive of Jon Lester and his relievers. Texas absolutely killed the ball, hitting line drives nearly a fifth of the time and home runs on more than a third of their fly balls. Everyone in the offense showed what they could do. Mike Napoli had a pair of home runs. Josh Hamilton had a bunch of hits and (another) moon shot. Ian Kinsler walked multiple times. Adrian Beltre flailed at balls hilariously and one of them turned in to a home run. Elvis Andrus continued to flash his new-found power by launching a ball off the right edge of the Green Monster, and blasting an opposite-field sac fly that would have been a Grand Slam in Texas. Nelson Cruz hit one of those things that just keeps carrying and then leaves the park. Michael Young hit a hard line drive the other way (that also just happened to leave the park). Craig Gentry had three base hits when I'll bet a bunch of Red Sox fans didn't even know who he was.

21 total hits. Seven players had multiple hits. Brandon Snyder and David Murphy came in as replacements and also reached base. Excitingly, a team that had 18 total walks coming in to the game had eight walks on the night.

So there you go, you can stop worrying about the offense. They are the first team to score 18 runs in a game, and just like that they're averaging over 5.7 a game. They're the first to top 60 runs on the season (oh, and they'll also be the last to allow 30, whenever that happens). In one game, they've gone from being fine but disappointing to the highest scoring team in baseball.

18 runs. A 15 run victory over a team that should be one of the best in baseball. 8-2 over bad teams is nice. Going to 9-2 with a complete and total destruction of a good team is awesome.

Texas looks, again, like the best team in baseball. It's only 11 games, but that was also a reality that would be easy to believe before those 11 games were played. With the Dodgers winning, the Rangers have the best record in baseball. With a +36 run differential, they are 20 runs ahead of any other team in the league, and 13 better than the next best in baseball.

Blah blah blah, long season, but looking incredible in 11 games is the right way to start the long season.

Biggest Play: With one out in the second, Mike Napoli ties the game with a two-run home run (14% win probability added). 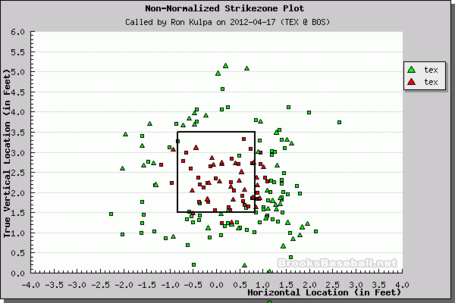