The bullpen shut down yet another opponent while the offense finally punched through on Sunday.

Don't call it a house of horrors.

The Rangers came in to their third series of the season having won one game ever in Target Field. They leave with a sweep, thanks to a late game comeback. The turnaround could be because they had a pretty small sample of games in Minnesota's new digs, or it could be because they are an even more awesome team than they've been the past two years. The second one sounds nice, let's go with that.

Anyway, with the tying run on third, Glen Perkins threw this pitch to Josh Hamilton. 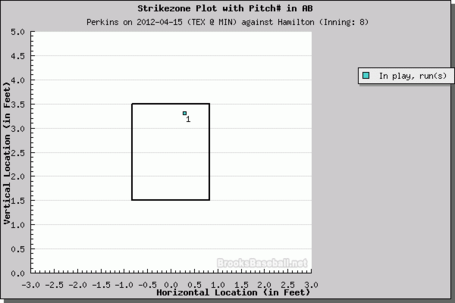 So he did. He swung, and he crushed. That gave Texas the tying and winning runs, after Elvis Andrus gave yet another eye-popping display of new power with an opposite field triple over the head of Clete Thomas.

I don't know what is wrong with Glen Perkins, or if he just hates Minnesotans. Honestly, Minnesotans are some of the nicest people I've ever met, so that seems unfair of him. He did it anyway, and it's part of why the Rangers won.

The other part of why the Rangers won was, again, the bullpen. Robbie Ross is looking kind of amazing. He entered with two on and no outs, with the Rangers trying to keep a 3-1 game close. He promptly struck out Justin Morneau and Josh Willingham, ended the inning, then pitched an easy seventh inning with another strikeout.

Mike Adams pitched a shutout eighth with two double plays (more on that later), and then Joe Nathan got yet another save opportunity, garnering two soft fly balls and a strikeout. Frankly, Nathan overall looks fine. He blew a couple games, only one of which actually looked awful, but that's what closers do. He's probably not the best reliever on the team, and that's worth carping about, but there's not a lot of reason to assume he can't at least be a fine back end reliever this year.

The concern is how often Ron Washington is pitching these people. With his seventh appearance, Adams is now tied for the league lead. Nathan is one behind him with six. Alexi Ogando also has six. This is an outrageous pace for the Rangers' best relievers.

The Rangers are playing a lot of close games, and they are winning or tied late in all of them (isn't that crazy, by the way?). Some of that is simply because baseball in general is not scoring a lot. The fact of the matter is, if things continue this way, Ron Washington and Mike Maddux are going to have to trust some of their lesser relievers to pitch typically key situations. They'll fail more often, but long term the Rangers will win more games and be healthier down the stretch because of it.

I mean, Koji Uehara has two appearances all year. He's been a great reliever for almost his entire career. His problem is homeruns. The minute you have a close game outside of a launching pad park, shouldn't you be leaping to the chance to use Uehara to provide rest for someone else?

Yes, you should. I think. I'm not paid to make these decisions.

Neftali Feliz's second performance was not as great as his first, but it was probably better than the box score indicates. There weren't a lot of swinging strikes (only five), and he had trouble locating the changeup -- with Thomas crushing one for a two-run home run -- but he also had to deal with some wet weather. When a pitcher has to go out in the rain, I'm inclined to take what I can get and not read too much in to the performance. The Twins contact was overall not great, he retired the first seven hitters, and despite the rain there were still flashes of a good starter. It's pretty rough he couldn't go farther than five innings, but one start is a small sample as it is. One start in the rain is nothing to panic about, particularly if you're panicking about three earned runs and two extra base hits.

So, the Rangers continue to win a lot of baseball games. This was probably the most tense one yet, but it wasn't a case of escaping while being outplayed. Minnesota was lucky to be ahead as late as they were before Texas rectified things. The Rangers already have their first sweep of the year, and they go in to a tough stretch of baseball with some very nice padding, both in the win column and ahead of their rivals.

On one quick note, because these things need to be brought up as often as possible, the Twins put the trying run on in the ninth, when Adams caught a popped up bunt attempt, then threw back to Kinsler at first to get the unconventional double play. Only, the runner was called safe because umpires have trouble seeing things some times.

Tom Grieve went in to his predictable "umpires have a hard time" routine, but that misses the point. Dave Barnett got the point by saying replay confirmed the runner at first was out. By a good distance, in fact. No one should expect an unaided human to get these calls right all the time, but baseball shouldn't expect their humans to be unaided. As it was, another unconventional double play -- force at first, tag on the path -- got Adams out of the inning, anyway, but that's good luck. It should never have gotten to that point. The more we bring this stuff up, the more likely it is something gets done about it.

But, yeah, Texas wins. Celebrate good times and such.

Biggest Play: Elvis Andrus triples with no outs in the eighth, bringing home Ian Kinsler and pulling the Rangers to within a run (28% win probability added). 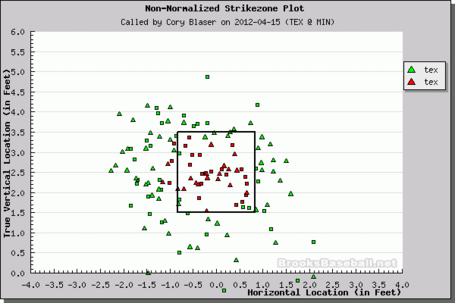