For every element of the Rangers that looked bad, there was another willing to step up for an easy win.

That's partly because Yu Darvish's second start in the Majors was once again uninspiring. The problem everyone cautioned about when he came over was nibbling, and while more than two out of every five pitches against the Twins missed the zone, nibbling was not a whole lot of the issue. There were a few strikes on the corners, and a few around the edges, that probably could have been called strikes, though his zone seems mostly normal with few awful calls. There were a few pitches close but not close enough, as well. All these might have helped, but that wasn't the problem.

The problem where the twenty-or-so pitches that were nowhere close. Repeatedly, Darvish was wildly high, or wildly low, and often away. There was no command whatsoever. Worse, it only became more of an issue as the game went on. By the sixth inning he was hitting guys (or at least coming close enough the ump could say he was it), and missing the zone more than half the time. He allowed the bases to load, and left without even finishing the inning.

Also bad in this start, the Twins weren't biting on any of his stuff. Everything looked nifty to watch, but it only resulted in six whole swinging strikes across the game. He fortunately was not hit particularly hard, inducing 10 ground balls and three or four soft fly balls, and that's great. But teams that hit better are going to hit those balls they don't miss harder. And if he's not getting them to miss, and giving them free baserunners, that's going to mean a lot of runs. And if he's throwing so many pitches, he's going to burn his bullpen to a crisp.

Darvish will get some positive word from this start for only allowing one earned run, but with four strikeouts to four walks, and the host of problems above, that was more a function of the team he got to face than anything. Two games is just two games, of course. Darvish is far from a failure at this point, just as he would be far from a success had he dominated these games. It's just frustrating.

The runs and high pitch count weren't entirely on Darvish, of course. Michael Young at third base is a very, very bad thing. Before the game I wrote that it was worth it to rest Beltre, but now I'm not so sure. In the second inning, he looked absolutely pitiful trying to field a ground ball, and then made the mind-boggling decision to throw to second, instead of getting the easy out at first, allowing a runner to score when the inning should have ended. It was as though he panicked, but he's a Major League Baseball player. They don't panic, right?

The second run off Darvish was also set up when a ball deflected off Young's glove and in to the outfield. It was awful. He drove up the rookie's pitch count and allowed runs. Darvish isn't totally off the hook for that, but the two of them combined to continue to stress the bullpen.

But, hey, as long as the bullpen is going to pitch a lot, it's nice that they're looking dominant at it. Once again, they entered the game, and didn't allow a runner to cross the plate. Robbie Ross induced a quick ground out to clean up Darvish's jam, and Alexi Ogando and Mike Adams were decent enough, before Ron Washington gave Joe Nathan another chance.

Nathan immediately gave up a hit on a flat slider, and another hit on what actually might have been a ball, putting runners at second and third. Then he proceeded to actually look just fine. He topped 95 on his fastball, garnered four swinging strikes, found the edges of the zone just beautifully, and got two strikeouts and a ground ball to end the small threat. There was a hittable pitch in there, and reasons to moan early, but Nathan actually looked pretty good.

Every night we talk about the pitching, but six runs is actually kind of an offensive explosion so far this season. MLB teams are averaging just over four runs a game -- and I mean just over (4.14) -- so topping that on the road is nothing to scoff at. Neither are thirteen hits, six doubles, and a mammoth home run from Josh Hamilton that I cannot find on the MLB highlights, or I would be linking it to you right now. The offense continues to be super aggressive, but it also continues to work, so it's hard to complain too much (and it might also be justified, stay tuned on that front!).

And congratulations to Brandon Snyder, who had three hits in his first Texas Rangers start. Yay.

It's redundant at this point, but the Rangers won by playing a complete game. Young was awful defensively but Elvis Andrus and Ian Kinsler both saved runs on diving grabs at key points in the game, the starting pitching was sad but the bullpen made up for it, and the offense wasn't distributed that great but the heart of the order did all the work themselves. Someone on this team has an off day, and someone else goes crazy to win the game, anyway.

Minnesota was called a house of horrors, but Texas now has a series win, and potentially a sweep, before their first off day. Good times had by all. 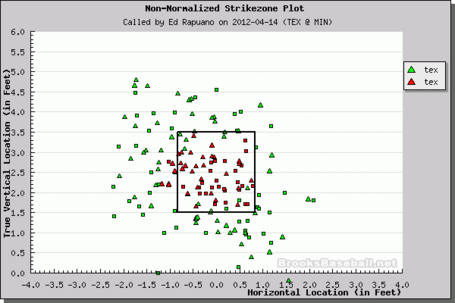