The Rangers play a complete game for a pretty one-sided victory, continuing their candidacy for best in baseball.

Share All sharing options for: Texas Pitching And Defense Continue To Dominate

The Rangers' pitching staff looks like something special so far.

The Washington Nationals have only allowed 18 runs on the season. Before they started their game, the Arizona Diamondbacks had only allowed 19, but they have already allowed six to the Rockies through four.

The Rangers allowed just one run Friday night, which puts them at 19. Meaning they are at worst going to be the second-to-last team -- and the last team that has to face DHs -- to allow 20 runs.

The offenses they've dealt with are not too scary, but there have still been terrific pitching performances to accomplish that feat. Like Matt Harrison in the series opener against the Minnesota Twins.

With the back of the Rangers' bullpen having been used so much lately, they needed a pitcher to go deep, and with brutal efficiency, Matt Harrison fit the bill. Hitting the strike zone with just under 67% of your pitches and inducing ground balls from a staggering 68% of your opponents will do that. Harrison was given a fairly low strikezone, and that was the death of the Twins. With nine swinging strikes, a zone that large, and that much command of it, it's surprising Harrison only had four strikeouts against two walks perhaps, but the results were still pretty awesome.

Of course, with that many balls in play, you won't go eight allowing one without some good defense. The Rangers pitching has been tremendous to be sure, but the fielding efforts help. Many of Harrison's ground balls were collected by his fleet infield support, turning singles and doubles in to outs and singles, and Nelson Cruz and David Murphy both had key diving catches. This stuff won't show up in the boxscore, so it's good to be reminded the pitchers aren't doing all the work.

With all that run prevention, the offense is getting a tad overshadowed. In some circles, it's even being fretted over due to a lack of runs. So it's also worth noting the Rangers' 35 runs scored trail only the Tigers in the American League. Four runs on the road is fine in today's baseball, especially in April.

Any night it seems someone is willing to step up, and tonight it was Elvis Andrus with three hits and a double. The double -- the opening of a three-run fourth inning that turned a 1-0 deficit around -- screamed to the wall, and coupled with his home run, offers a small suggestion that he might really have put together some upper body strength this season. We'll see more of that if he can keep making contact.

If there is a concern over the offense, it's their continuing lack of patience. They saw just 117 pitches tonight and worked no walks; a recurring theme. Once again, Texas will remain an aggressive team, but this level is not going to work well against better pitchers.

Ian Kinsler hit his fourth home run. He is kind of going crazy on the American League to start the year.

The most interesting note of the game came in the ninth, when Alexi Ogando was sent in to close rather than Joe Nathan. Jeff Wilson tweeted that Nathan was supposed to have a day off, so we probably shouldn't read too much in to it, but who knows if he had a day off in part to give someone else a brief closer audition. Ogando struggled, but it was also raining. So the summation of this paragraph is really that tonight was probably meaningless one way or the other for the future of the Rangers' closing position.

The schedule has been friendly, but the Angels had the Twins and Royals and went 2-4. With another loss tonight, they are already 3.5 games back, and in a race that is supposedly going to be close the whole way, that's kind of large this early.

And if the Rangers are going to pitch this well. . .

Biggest Play: An Adrian Beltre ground ball squirted in to the outfield with no outs in the fourth, scoring Elvis Andrus from second, tying the game, and moving Josh Hamilton to second (16% win probability added). 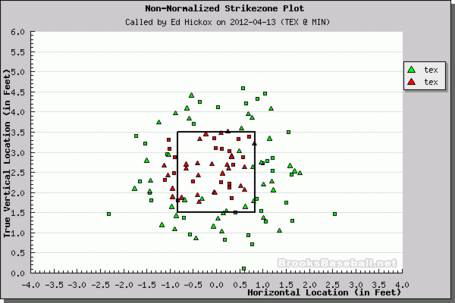