A poor offensive showing was made up for by a dream display of secondary pitches.

Share All sharing options for: Neftali Feliz First Start Does Not Lack Luster

A day after one young Texas Ranger had a disappointing first start, another did not disappoint.

Seven innings pitched, four hits, no runs. That is how the Neftali Feliz starting era begins in Texas. This was always how it was supposed to be. He was always supposed to be a talented starter. But there is still no way you could expect the first start to go like that.

While there were plenty of pitching highlights, the lone offensive highlight was David Murphy, who had three hits and two more doubles on three well-struck balls. His second inning two-out RBI served as the only offense in the entire game, and that was on an infield single. It's far too soon to declare Murphy as headed to a career year, but after his atrociously slow start a season ago, it is nice to see him starting off well.

But that doesn't matter for one night because the pitching was the show. Every prognosticator worth listening to tried to tell the public the Rangers' would be good because of a deep and awesome pitching staff, and so far that is the case. They already have two shutouts. The bullpen -- thanks to more good outings from Mike Adams and Joe Nathan -- has allowed just a single, wall-scraping home run. The pitching is the star for this franchise, no matter how weird that is to say.

For Feliz's part, he had some early jitters, walking two and missing the strike zone repeatedly with high fastballs, but he locked it down from there. If you remove that first inning, 66% of his pitches found the strikezone, and he never walked another soul. And they weren't just in the strikezone, they were down in the zone, yet high enough to get called.

Then there were the oft-fretted over secondary pitches. Rangers fans have been dreaming of this moment for years, but seeing that change-up being thrown for easy strikes and baffling hitters was unreal. Three out of every four changes Feliz threw were in the zone, and a staggering 16% of them caused (silly) swings and misses from Seattle. He started leaning heavily with the fastball, but once he introduced that changeup, the Mariners were dead.

Which is not to forget his slider. . . esque. . . thing. It had break, it made the Mariners look foolish (three swinging strikes of its own), and it was a nice compliment. The fastball was there, it approached 97 and sat in the mid 90s, and he located it after a few rough first PAs, but Feliz's chances as a starter have always been tied to those secondary pitches. At least for one day, those secondaries were completely, absolutely, stunningly beautiful. It cannot be overstated: seeing that is a dream come true for the Texas Rangers fan.

There are reasons to hold your horses, of course. The first few batters were terrifying, and we can't just pretend they didn't happen because he got over it. He was not especially efficient, and nine swinging strikes in 108 pitches is not great. There were a lot of fly balls, and this was the Seattle Mariners.

But all that is a collection of reasons he wasn't profusely dominating. They are not reasons he wasn't good. He was very good. Neftali Feliz is finally a starter, and in his first game he shut out a team for seven innings. No amount of nitpicking over peripherals or strength of opponent is going to stop that from being awesome.

Biggest Play: With two outs and runners on the corners in the seventh inning, Miguel Olivo grounds out to Neftali Feliz (10% win probability added). 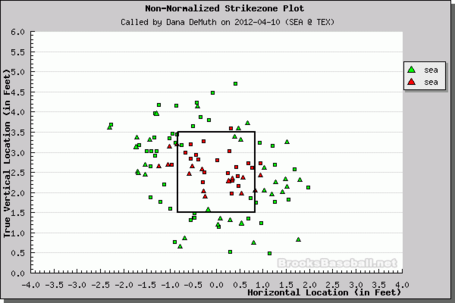