It is a given that ballpark food is going to be expensive, but the Texas Rangers are taking this to a whole new level by offering a two-foot long, one-pound hot dog that will set patrons back $26.

Team president Nolan Ryan talked about the giant hot dog in an interview with ESPN Radio in Dallas:

"It has to be a tremendous wiener. And then we're getting some kind of exotic bread flown in from France. And I don't know what kind of condiments you put on that. But I do want to look at it.

Of course Ryan wants to take a peak at this hot dog.

Well here is the item: 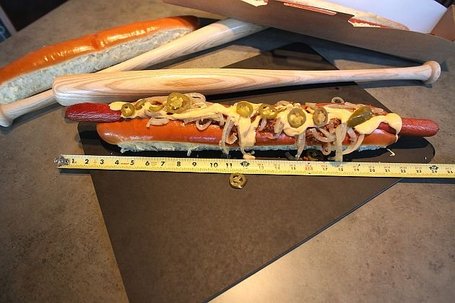 The hot dog also will have two different names it all depends on where one buys the hotdog. If it is bought at the Captain Morgan Club, it will be called a "Champion Dog," but if it is bought at a standard concession stand it is called a "Boomstick."