Rangers vs. Orioles: A shot at redemption

Texas will be a player in the first attempt at baseball's new playoff format, trying to save a season dangerously close to lost against a team with many familiar faces.

Share All sharing options for: Rangers vs. Orioles: A shot at redemption

Well, the season is not over.

The Rangers once looked like they may be historically great, and right up until the seasons' final throws they still looked at least like division champions and the top seed in the American League. Instead, they find themselves participating in the first ever American League Wild Card play-in game, with one shot at keeping this season from being a tragic waste.

We can dwell all off-season if this doesn't go well, though. For now, let's look ahead at the game before us.

Their opponent in the game is the story of the year, and the Rangers want to put a stop to that. The Baltimore Orioles are a team posting their first winning record since 1997. An organization that seemed to be completely wasting what was recently one of the strongest farm systems in baseball, while facing the uphill battle of winning against the formidable American League East. They have shocked the baseball world by winning 93 games, pushing the Yankees to the last day, and making it in to the Wild Card game.

And they have done that while outscoring their opponents by a meager three runs.

The Orioles went 29-9 in one-run games. They went 16-2 when pushed to extra innings. Whether done by voodoo, luck, or some previously-unknown super strategy for tight games, that puts them here as a road bump or block to Texas's hopes of returning to the World Series.

They also serve as something of a sister squad for the Rangers. Endy Chavez, Darren O'Day, Tommy Hunter, Taylor Teagarden, Chris Davis, and Pedro Strop are all very familiar names to Texas fans, and have been key players on the Baltimore season. All year it has been kind of fun to watch the Jon Daniels Era rejects cobble together a second winning squad, and it is a bit frustrating that both teams will not be able to make the playoffs proper.

Without the new playoff format, this game would still be played. The Rangers weren't saved by the new rules. It would just provide an opportunity for Josh Hamilton to take away Miguel Cabrera's triple crown, and would not provide any more stats for the Playoffs section of everyone's Baseball-Reference page.

The Rangers wasted a brilliant start to the year, but now begins their second chance. They have a shot beginning with this one-and-done showing to redeem what seems headed towards a bitter season. One night in Arlington against the Baltimore Orioles, Texas can begin it's path to making things right, or we can all go home early this year.

Six is not an arbitrary number here, that just happens to be the only six Orioles to have reached the level of two Wins Above Replacement on FanGraphs. That's typically considered the level of average. Again, it seems kind of amazing this team managed to get 93 wins. For those of you brand new to these playoff previews, by the way, any stat that makes you scratch your head can be found in a glossary at the bottom.

Nick Markakis would have made this list, but he is out of for the season. Hammel and Chen obviously don't matter to us at all, since this is one game and they are not starting it.

Jones has become something of the Orioles' biggest star these days, hitting for fantastic power on top of solid on base skills at a premium position. Statistically, he has always seemed a bit overrated defensively, but he can at least handle the position well enough to make his bat valuable.

Wieters has arrived as one of baseball's best catchers, and yet still remains something of a disappointment. He was not supposed to simply be an All-Star, he was supposed to be doing things like what we see from Mike Trout and Bryce Harper, dominating the Majors from the first moment. While that may not be the case, getting a solid bat out of your catcher is a good plus.

At the bottom of the position players is Chris Davis, who still strikes out at a mighty rate, but also hits balls a long way when he connects. The profile is familiar, but it seems he has finally made it work well enough to carve out a solid full season at the plate.

Not making this list and worth noting is 20 year old Manny Machado at third base. He is the Orioles' Jurickson Profar, a young, toolsy infielder with a ton of ceiling and promise for the franchise. He did not have the chops to stick at shorstop, but he is a huge dose of excitement for birdland. 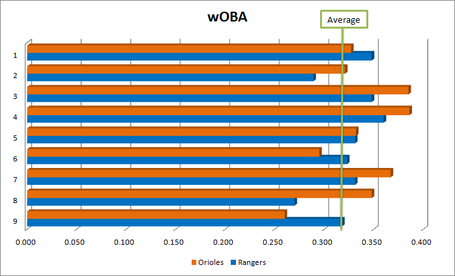 The Orioles do not pose a particularly intimidating lineup, coming out of 2012 significantly below average. They make a ton of outs, putting up a .311 OBP on the season despite playing in a significant hitters' park.

What they do have is a lot of pop, posting the second best rate of home runs on fly balls in baseball. They miss a lot, but when they connect, they can hit it a long way.

What they also have is four true lefties in their lineup to thwart the platoon advantage of Yu Darvish. Wieters will also be hitting lefty, but he is worse there than from the right side of the plate, at least.

Soto will start for the Rangers, since he has become Darvish's favorite catcher. Napoli is assuredly DH with a lefty on the mound. That means Michael Young in the field, and while it might be better to get Moreland in instead -- even at a platoon disadvantage -- the Rangers have long decided they're going down with the Michael Young ship.

Should the Rangers win this game, they will have lost out on a third straight division flag and an extra home game in playoff series', but the big loss will have been losing out on Yu Darvish going twice in the ALDS. Fortunately, that would be somewhat offset by the Yankees' struggles with lefties.

Focusing on the here and now, though, Darvish gives the Rangers one spectacular chance of getting back to the postseason (the real postseason). Darvish ended the season with a phenomenal 3.29 FIP; absolutely stellar for a pitcher making his Major League debut in a hitters' park. His array of seven pitches (eight if you count his different curves [nine if he actually can throw a shuuto]) keeps every hitter on his toes, and the electricity he puts behind some of that stuff is baffling.

The key for Darvish will be what it has been all season: establish that fastball. We have seen Darvish struggle against sub-par lineups before, and he can again if he is not getting ahead early. We will, most likely, have a good concept of how this play-in will go when we see if he can throw his four seamer for strikes and miss bats with it. When he gets ahead, he can throw his hilarious breaking stuff and get batters to chase. And the Orioles love to chase. If he can get ahead, Baltimore has a very slim chance of winning.

We are very familiar with the man on the mound for the Orioles, having seen a lot of Joe Saunders during his days in the division with Los Angeles. It's also been pretty fun, since he has a 6.48 career ERA against Texas.

Saunders has managed a solid season, and has actually done better in the American League since being traded by Arizona mid-season. Overall, he posted a 4.07 ERA, which was exactly in line with his 4.08 FIP, though those numbers have been 3.63 and 3.77 respectively in the AL.

Strikeouts are not Saunders's thing, averaging barely over five per nine in his career (slightly better this year), and missing very few bats. He makes up for that some with an avoidance of walks. Think of him like Tommy Hunter in that regard, or maybe a poor man's Matt Harrison.

Saunders primarily throws a two-seam fastball that sits at around 89 miles per hour, but has touched 93 this season. He finds the zone regularly with that pitch, but gets few swinging strikes. Punishing it early will be the Rangers' task in the game, since he uses it to set up their very kryptonite: the change up. Coming in around eight miles behind the heater, his change has gotten a swing and miss on 8.5% of the times it was thrown this year. He also managed 13% on his slow curve. It is a boring repertoire, but one that can damage a lineup dramatically if they do fall behind in the count.

The way to win a lot of close games is to have a great bullpen, and that is what the Orioles possess. Jim Johnson and O'Day in particular have had fantastic years, but Baltimore has more than enough fire beyond that in their pen to make a late deficit in a one-game scenario terrifying. Enough, in fact, to probably mean a short leash for Saunders. Texas will probably want to get to the starter as quickly as they can to avoid being shut down by the relievers.

Using defense to forecast a single game is a waste of everyone's time, since so much can happen without being even remotely a surprise. Suffice to say, the Rangers field well and the Orioles do not. It is very low on the list of things likely to make a difference, but if one team is going to make a great play to change the game, it will probably be Texas.

If you have been reading these previews in the past, you expect a projection here, but there is just no point in one game.

Simply put, the Rangers should be more likely to win this game than lose it. They have the better lineup, the better starting pitcher, and they're playing at home.

Should does not mean a whole lot when the craziness of baseball gets involved, though. The Orioles should have a record barely over .500. The Rangers should have been able to win at least one game in Oakland, or more than four of their last 13 to avoid being in this position. A guy on one of these teams at one point hit four home runs in a game (against this very opponent, in fact), and later on dropped an easy fly ball to put his team behind in the biggest game of the season. Nothing that happens in one game should every be surprising, and so, unfortunately, the Rangers face the cruel fact that their season can be ended by the nature of baseball's unpredictability.

It is some comfort, of course, to know your team is the favorite. I'm sure a fat lot of good that will do as you sit on the edge of your seat, with every pitch potentially making the difference between the season ending or the season going on. Still, there is one more game to play. One more chance for the Rangers to keep this season from being clouded by the darkness of bitter memory.