Most of Friday night's Texas Rangers game was a tight one, starting with some early bad signs, until they remembered they were playing a fourth rate team and asserted their dominance.

Colby Lewis is just incapable of not allowing home runs. The A's have more trouble hitting the ball out of the park than any other team in the AL, but that does not matter for Colbyashi. With two outs in the first and a runner on -- thanks to a walk -- he left a cutter with no cut right in what constitutes as the wheelhouse for just about every hitter in baseball, and Josh Willingham took him deep for an early 2-0 deficit and some mild panic.

Fortunately, Lewis settled down from there and handled the awful A's lineup with ease. As is his (still infuriating) custom, his velocity got back up to where it needs to be after the first inning, and he allowed only a smattering of weak hits and no more walks before being pulled in the eighth inning. All told he managed six swinging strikes from the hardest team in baseball to whiff (yes, that is true), for seven strikeouts, one walk, and just two runs allowed. A strong start, but also a strong start against a weak team, and on the road. Lewis's major problem is still mistake pitches getting hammered, and against a good offense that's disproportionately more dangerous. He was a big part of a Rangers' win tonight, but he was not especially dominant and probably did little to instill hope in him as a playoff pitcher.

Also following Lewis's first inning mistakes, the Rangers quickly tied the game right back, but it remained like that until two more runs were added in the fifth. Even still, 4-2 is nothing particularly comfortable. If you look at the score, this seemed like an awesome game to watch, but it didn't get there until a four spot in the seventh, followed by five more in the eighth. It took a while, but the Rangers offense finally began slaughtering Oakland pitching to put the game way out of reach.

Each of the top four hitters had multi-hit games, led by Ian Kinsler's three -- plus a walk -- from the lead-off spot. Texas singled and doubled the A's to death, until Mike Napoli put the finishing touches on the beating with a home run over the bullpen that must have left a crater when it landed.

After a nifty run of success recently, Mike Adams came in to allow another home run -- this one for two runs (one inherrited) -- but otherwise looked fine. Neftali Feliz, meanwhile, looked more than fine. With plenty of rest, he stopped hard on the A's with a perfect inning featuring two strikeouts. He threw two sliders, both for strikes, but the fastball was something else on this night. Touching 101 with plenty of movement, only two of his 12 thrown missed the strikezone, and three resulted in Oakland hitters flailing miserably. A shallow fly ball was the best Oakland could manage. If rest is what Feliz needs to pitch this well, that is very encouraging for October.

With a nine run victory, the Rangers' run differential now sits at +127. While that is now comfortably behind the top three teams in the league, it is closer to Philadelphia for second place than it is to Milwaukee for fourth. Significantly, however, that is just two runs behind the '96 Rangers for the best mark in franchise history. Just a three run victory Saturday, and Texas is in uncharted territory.

Thank you for your gifs, Christopher Fittz. 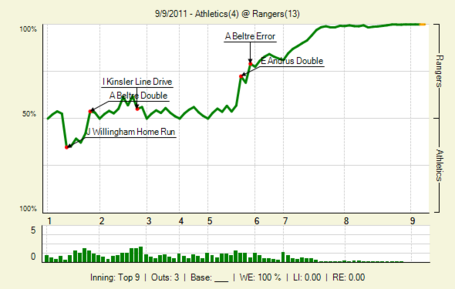 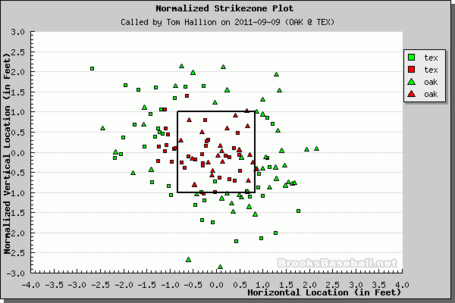