Share All sharing options for: Rays Dominate Opener, Rangers Down 0-1

It is very simple to break down what was wrong with the Rangers in the first game of the playoffs: everything.

It makes discussing the game short and easy. Starting Matt Moore in game one will never be second guessed now, as the kid went seven shutout innings, with electric stuff, to make absolutely certain he will be the national story for the next 24 hours. Or maybe for the rest of eternity.

That does not begin to explain the problems with this game, though. Moore was fantastic, with six strikeouts to two walks, but he was not the only, or even biggest, reason the Rangers lost. 9-0 games don't happen just because one team plays well. They also happen because one team plays horribly, and Texas played horribly.

For all of Moore's talent, 76 of his 97 pitches were fastballs, and the Rangers could do nothing with that at all. Certainly a lot of that is on Moore, but a lot of it is also on a putrid showing by the offense. If you remove Josh Hamilton and his two hits from the game, the Rays have a no-hitter. Meanwhile, despite seeming like the relative hero thanks to the only two hits, Hamilton instead made himself just another piece of failure in game one by inexplicably bunting over Elvis Andrus following a walk to start the sixth inning. The Rangers had a rare shot at run scoring, and Hamilton -- one of the best hitters in baseball and a man who never ever bunts -- opted to play small ball when the game was already out of hand. Yes, it likely made no difference in the outcome, but it was a horrifying bit of bad baseball in an awful game.

Outside of Hamilton and Andrus, only Ian Kinsler reached base, doing so on a walk, but even a half-off pizza day from the offense would not have been enough to win thanks to C.J. Wilson. Wilson is the staff ace, has been one of the better pitchers in baseball for two years running, and could likely be argued for a spot on the back of Cy Young ballots. Yet, to begin the playoffs in possibly his last season as a Ranger, he put forth one of the worst starts of his career. After an efficient, and exciting, start to the game, he started off the second with a two-run home run served to Johnny Damon, and the Rangers were down 3-0 before the inning was over. Kelly Shoppach, who no one would mistake for a power threat, had two home runs off of Wilson. The Rays are a good offense against left handed pitching, but not this good.

All told, the staff ace went five innings with eight earned runs allowed. The peripherals outside of home runs allowed were okay, with six swinging strikes, six strikeouts, a walk, and a hit batter, but his mistakes were frequent and punished once he fell behind. Perhaps even with a limited appearance, starting Wilson on short rest was a mistake. Perhaps he was more unlucky than we are giving him credit for. Perhaps something else was wrong. Or perhaps he really was just very bad for a day. He certainly wasn't helped out by a usually-awesome defense, with a weird Beltre error leading to runs, a Craig Gentry misplay in left, and a ball that Gentry would have gotten sailing over Hamilton's head. Regardless, the result was a hole that even the Rays on game 162 could not have climbed out of

So now the Rangers find themselves in exactly the position the Rays did last season -- down 0-1 after getting blown out at home to start things off. Just like that, the season is in danger.

That said, it is also not necessarily time to panic. The Rangers won two games in New York, and three games in Tampa, last year. They are still the better team, and one day of Bad Ceej and Matt Moore doesn't change that. They need to go 3-1 to win, but that's more than doable, even with half of the games on the road. Winning the ALDS just got a lot harder, but it didn't become hopeless.

As far as the probability model used from the preview, the Rangers were given a 75% shot of winning, but that was largely based on the bullpens which did not factor in to game one, and a rather pessimistic view of Matt Moore. That said, even after game one becomes a loss for the Rangers, they come out winning the series in the same model 52% of the time. Still slightly favored! Technically.

That could change if the Rays decide Moore should pitch twice, but the Rangers are good, and going 3-1 against lesser teams is not a bleak situation. They are no longer the heavy favorites to advance, but it should be easy to believe they are also not much worse than a coin flip to stay alive after a pretty awful drubbing.

A win tomorrow immediately puts Texas back in the position of needing to just win one more than the Rays do the rest of the way. The Rays fortunes changed quickly on Friday, and as bad as things feel right now, the Rangers' fortunes can change just as quickly Saturday.

Now back to your alcohol and other various distractions. 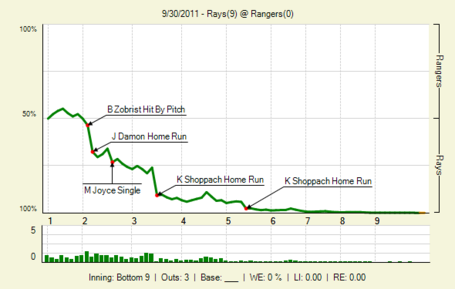 VOTE FOR THE GOAT OF THE GAME.