Still, some big things came from the Rangers Monday night game against the Los Angeles Angels of Anaheim. The biggest of them did not even affect the Rangers, but rather their fans who have grown to hate the Angels as a true division rival: official elimination. Boston has dropped eight of its last 10. Tampa Bay has barely kept its head above water. Against sub-par teams like the Blue Jays, Athletics, and Orioles, all the Angels needed to do was post a winning record and they would find themselves solidly in contention for the Wild Card going in to the final set of games.

Heck, on Monday night, all they needed to do to stay alive for one more night was beat a team with nothing to play for, unwilling to send its starter deeper than the second inning, before handing the reigns over to a guy with just over four innings to his name. They could not even do that, and that is why the AL West -- despite all manner of fans and media insisting it was a race, or that the Angels might even be the favorites -- will not go down as a close division in 2011. Because the Rangers are a very good team, who held their own against other very good competition, and dominated inferior opponents. The Angels are not any better than an above average team, and played like it down the stretch.

And so, with a 4-3 victory, the Rangers put the Angels out of their misery Monday night. Their fans have experienced glory Rangers fans have never known for the past decade, but for the second straight season they are the lesser squad (with the record to match).

The Rangers offense was led by Elvis Andrus -- sporting an absurd .385 wOBA in the month before the game was even played -- who had 4 of the 10 Ranger hits. Adrian Beltre picked up Andrus following one of those hits with a two-run home run, tying the prized free agent who only performs in contract years with Ian Kinsler with the team lead at 31.

Kinsler managed to reach base twice, but did not manage his 30th steal. He has two more games to notch his second career 30/30 season.

Mark Hamburger nearly doubled his career innings pitched in relief of C.J. Wilson with three and a third two-hit, one-run innings. His stuff got rave reviews from members of the staff watching the game, and resulted in a nasty nine swinging strikes in his short debut, most coming on the 87 mile per hour change-up he matched with with a 92 mph fastball.

The game was not completely meaningless for the Rangers. Wins, of course, are always fun, and this was the 94th in the Rangers season. That ties the 1977 Rangers for the second best record in franchise history, and gives them two shots at tying, or surpassing, the 1999 Rangers' mark of 95. Of course, Baseball Prospectus estimated the Rangers have played more like a 101 (yes, you read that number right) win team coming in, so perhaps we should be saying "only 94."

Most importantly, though, the win keeps the Rangers in front of the Tigers -- who handled the Indians with ease -- for another day, and takes the magic number for hosting the first round of the playoffs down to two. Avoiding the Yankees, opening at home, and getting an extra game should it become necessary, are all good things. Managing to get closer to that goal without using up your starting pitcher is a good thing.

The 2011 Texas Rangers are a good thing. 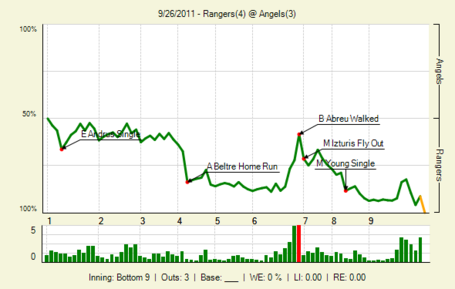 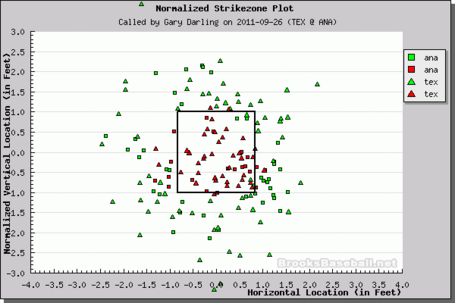