Wednesday night's game spent most of the evening as the kind of that makes a fan want to kick something. C.J. Wilson had the stuff, getting 13 swinging strikes from the best team in baseball at avoiding whiffs, with eight strikeouts and just five hits allowed. Unfortunately, he faced the sworn nemesis of the Texas Rangers, umpire Gerry Davis and his wandering strikezone. The questionable zone drove up Wilson's pitch count, keeping him to just six innings, and helped produce three walks. One of those walks extended a fifth inning which saw Oakland eke out two runs to take the lead.

At that point, ex-Ranger Brand McCarthy was "cruising." By cruising, he was getting the Rangers to hit balls to fielders when runners were on. Through the first seven innings, six Rangers reached safely with no outs, and the only one who scored did so on a Mike Napoli double play. McCarthy only had one strikeout to his name, but the Rangers -- and the luck dragons -- were bailing him out and wasting opportunities, and the eighth inning began in a game that felt like a slow death march of frustration. The sort of game that feels really awful when your team doesn't have a five game lead in the division with eight to play.

Fortunately, instead of being a mostly-meaningless loss, the heroes of the Rangers came through to add another attractive win to the resume. The Rangers' bullpen Cerberus of Koji Uehara, Mike Adams, and Neftali Feliz ended the game with three no-hit innings, with only Feliz managing some relative struggles with long at-bats and a walk allowed. In the eighth, the Athletics made the strange decision to pull McCarthy after just 79 pitches, and Ian Kinsler launched a home run off of Grant Balfour to tie the game, followed by the game-winner from Josh Hamilton. Two bullets to take the game from frustrating to awesome in a matter of moments.

With the victory, the 2011 Rangers have tied 1996 and 2010 for the third most victories in franchise history, and are a 5-2 finish to the season from tying 1999 for the most; very doable against the Athletics, Mariners, and Angels. More importantly, it moved the magic number to three, a tiny number that could be wiped away before the Cowboys play again. And perhaps most importantly, it kept the Rangers tied with Detroit for homefield in the first round of the playoffs; with the Tigers owning the head-to-head tie-breaker, falling back a game would be like giving them a two game lead with seven to go.

This also marks the first time the Rangers have ever produced back-to-back 90 win seasons. With two of the best seasons the team has ever put forth strung together -- and another one high on the list in 2009 -- a World Series appearance previously, another playoff appearance forthcoming, and a still-fantastic farm system, we are certainly in the midst, or perhaps at the beginning, of the golden era of Texas Rangers baseball.

It's fun to take a moment and appreciate that. 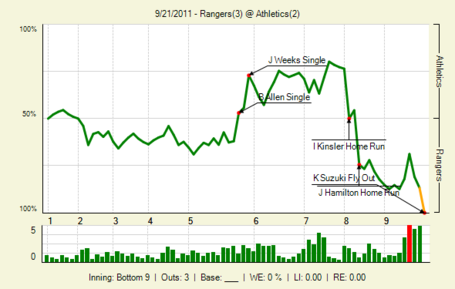