Share All sharing options for: Rangers Collapsing Against Tough Schedule

If the Rangers are going to collapse, rumor has it, it is going to come over the next couple of series, as the Rangers face a tough road test while the Angels get some cupcakes at home.

The first game of the awful run -- on the road against the Red Sox -- was not a classically beautiful baseball game, but it had just about everything a Rangers fan would like to see, as Texas knocked around Boston yet another time in 2011.

It had offense. Before the first inning was even over, the Rangers had a multi-run lead, and put it out of reach by the mid innings.

It came from the likely sources. Ranger of the Year Ian Kinsler launched a mammoth blast over the Green Monster that would do Josh Hamilton and Nelson Cruz proud. Only Mike Napoli -- who is allowed a bad day now and then -- started the game and failed to deliver a hit.

It came from surprising sources. Elvis Andrus, having already walked twice and stolen a base, swung at a baseball in the fifth inning and put it in play. Something he does often, but unlike often, this ball went in to the stands, where fans were sitting. Not only did it leave the field of play, it did so by scaling the aforementioned Monster, the kind of power a man with four homeruns does not seem to possess.

It also came from exciting sources. Already with a 1.025 OPS over the past two weeks, David Murphy led all Rangers with four hits, including a towering home run. It was unlikely Murphy became a permanently-awful player in one off-season, but it was getting hard to have faith in returning to at least mediocrity with his 2011 performance until recently. If Murphy has actually "found his swing" or whatever, he could be a very welcome tool for the playoffs.

Perhaps shining more greatly than the offense was Derek Holland. The Rangers have no clear answer to who should make the post season rotation right now, and Holland's strongest case is his potential to dominate a game where you need a dominant start to win -- a high-risk/high-reward gamble against a CC Sabathia or Justin Verlander, for example. Tonight, he was that dominant starter against not just a playoff offense, but one of the best offenses baseball has to offer.

Considering he was facing a fully-stocked Boston lineup, Holland may put forth his finest moment this evening. Nine of his 98 pitches resulted in swinging strikes. His fastball was in the high 90s and in the zone, and his curveball was making people look silly. Through seven shutout innings -- pulled because it was a game that did not need the starter to go deep -- Holland struck out six, and allowed just two small singles. Most impressively of all, against the Boston Red Sox offense, a team that has turned free passes to an art form, a team that averages nearly one every 10 plate appearances, and a team that slows down games to a glacial pace with their patience, Holland gave up zero (0 [not one]) walks, and never needed more than 18 pitches in an inning.

All this in Fenway Park.

The only extra bonus you could hope for would be an awesome rookie debut. But guess what! This game had that, too. Centerfielder of the Future Leonys Martin came to the plate in the eighth inning, and roped his first Major League swing for a solid single. For an encore, he flashed his much-drooled-over fielding tool by running down a hard hit fly ball in deep center for a thrilling out. Martin has been the stuff of legend for the hardcore Texas fans ever since he signed, and gave them a nice preview to ice the delicious cake of a 10-0 game.

Martin does bring up the only thing there is to complain about from this game, unfortunately: why was he not in until the eighth? The Rangers were up 10-0 in the fifth. Even the Red Sox put in their back-ups by the late innings, but Ron Washington -- with expanded rosters, an exciting rookie, and multiple fragile stars -- insisted on keeping his starters in until the last possible moment. Any answer as to why would likely be unsatisfactory, but fortunately no ill came from it (yet).

As the season winds down with the Rangers (extremely) likely to play post season baseball, the common discussion will be who Texas fans will want to see in the playoffs, and the way the Rangers have played the Red Sox this season, it sure seems like they're the choice. The Rangers are now 5-3 against Boston, outscoring them 51-37, but then eight games is not such a great sample, and the Red Sox are still likely the best team in baseball (when healthy). It was only three years ago when the Angels were 8-1 against the Sawx for the season, and put up little fight against them in the playoffs. Still whether or not the Rangers truly own the Red Sox in a match-up kind of way, their performance against them this season should leave no doubt the Rangers can play with the Red Sox should they meet when the games matter in the big way.

The Magic Number has dropped once tonight, and with the Twins leading at this moment, it may yet drop again. 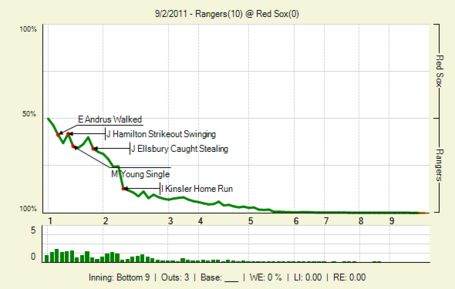 Rangers Blow Out Red Sox 11-4 To Win Another Series