With a comeback win in Seattle (where win expectancy was as low as 15%), coupled with an Angels loss to the Orioles, the Rangers have a magic number of seven, and a lead of 4.5. We are now to the point where this could be over in a bad week for Anaheim. A Detroit loss also puts the Rangers a game back (plus tie-breaker to the Tigers) for homefield in the ALDS. Texas's record is now 87-65.

If the Rangers play .500 ball the rest of the way (6-6) -- against some subpar competition -- the Angels would have to go 11-1 just to force a one game playoff. That is not the official end of the division, of course, but you could go ahead and begin the first verse of your AL West lullaby now.

Win Expectancy, strikezone, and Player of the Game poll all after the jump. 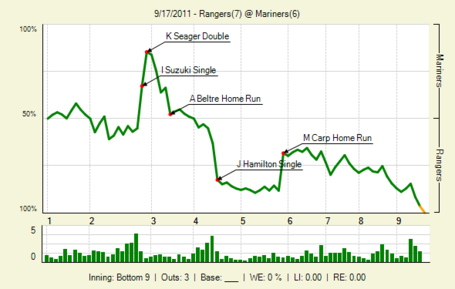 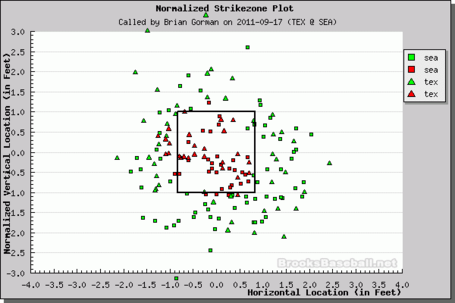