It has not been against the most top-flight of talent, but Derek Holland appears to be continuing to mature before our eyes.

Wednesday against the Indians he went seven innings with nine swinging strikes -- five on his vicious slider -- and another evening of high 90s fastballs. The result was six hits, six strikeouts, and just one run allowed on a solo shot. It was not necessarily a dominant start -- there were three walks allowed -- but it was a start that would likely be good enough to keep Texas in a playoff game. If he is really maturing, and this is the minimum level of stuff and command we can begin seeing from him going forward, he is a good second option on a playoff rotation, and everything we hoped for in his blooming career.

The story of this game is easy to tell because it came in one huge inning. The fourth began with a scoreless game, and ended with the Indians' essentially finished for the evening.

It all started innocuously with a Josh Hamilton walk, which Michael Young made hurt with a double, scoring Hamilton. An Adrian Beltre fly out did damage to the hopes of a big inning, before Mike Napoli seemingly flailed at an almost-outside pitch, and yet managed to hit it to center field for a home run.

Immediately following the home run, David Murphy flew out, and the Indians seemed to have a chance still. Three runs had crossed the plate, but there was no one on and none out. What followed, though, was pure comedy (except for poor Cleveland fans).

Yorvit Torrealba singled to keep things alive. Craig Gentry then singled off of the shortstop's glove, runners were on first and second, and Dave Barnett said something about how the Rangers were "not done yet" or some such. Of course, the odds of getting a bunch of runs were still slim, but it was nice.

But then third baseman Lonnie Chisenhall couldn't handle an Ian Kinsler ground ball, and the bases were loaded. Inning still not over. The thing to remember is the Indians are one of the worst fielding teams in baseball, and it was hurting them. It hurt them again when Elvis Andrus reached on an infield single, a run scored, and the bases were still loaded. Three consecutive fielding gaffes, and the Rangers had a four run inning.

Four runs is a lot, and the bases were loaded, but all Cleveland needed was one out. The Indians were still clinging for dear life.

To that point, in fact, Holland had already struck out three, only allowed one walk, and two hits (one a weak single). While the actual practice of "pitching to the score" is questionable, if ever there was a time to do so, it was following the fourth inning of tonight's game. So if there is any sort of "it was solid, but it was the Indians" feeling coming from this game, there is always that nice potential counter-argument.

Ian Kinsler added another homerun, and Darren O'Day returned effectively with a two-strikeout perfect ninth inning to end it, as Texas added another nice little win to their record. They have now put away the Cleveland series, with a chance to sweep Thursday. An 11-2 record the rest of the way (two wins and three sweeps, with Cleveland already a win) would give them the best record in franchise history; difficult, certainly, but possible against the AL West. And considering the Tigers don't lose anymore, that might be what it takes to get homefield advantage in the first round.

By the way, that scene up there creeps me out a lot more now than it did as a child. 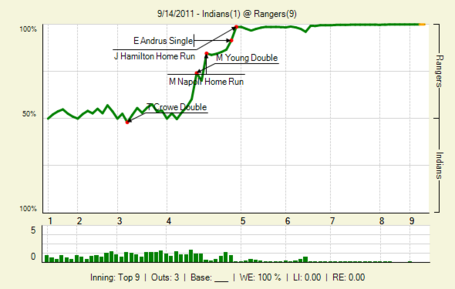