Share All sharing options for: A's Drop Rangers With Series Of Gut Punches

If there was a more frustrating Texas Rangers game to watch in 2011, I cannot think of one.

This game featured an ineffective starting pitcher, and a completely awful reliever, as well as tons of horrible abuse from the luck dragon, and yet there were still chances. If you want a silver lining, that is where you find it. Not often does a team recover from that sort of combination of bad luck and bad pitching to nearly win.

Of course, the flip side of that is obvious. The Rangers had repeated opportunities to potentially pull out a win, and either failed, or were simply snake bitten. That may make for a game that means little in the grand scheme of evaluating the talent of the squad, but it is nonetheless painful to watch, especially with another team looming far closer in the pennant race than they should be.

In the fourth, there was Michael Young being robbed of a base hit by a diving Ryan Sweeney, followed two batters later by Josh Willingham running down a David Murphy fly ball to left with a runner on. In the seventh, with the tying and go-ahead runs on, there was a Josh Hamilton deep fly ball traveling just foul. In the eighth, the Rangers got the tying run on to start the inning, before Mitch Moreland hit a line drive foul but directly in to the glove Brandon Allen, who stepped on first for an unassisted double play. Texas finally got a break on their final out when Michael Young was called safe despite being clearly out, putting the winning run on base, but the luck dragon took it right back, sending Adrian Beltre's line drive directly to the second baseman's glove.

It was the theme all night for the offense, exasperated by an awful Bill Miller strikezone, which expanded late in the game when Texas needed consistency to come back. If you look at the chart down below, you'll seen the low strike only called four or five times all game. Of course, the low strike is never called, but the problem was they all came in the late innings, and -- as you can see -- they were all thrown by Oakland A's. Two came in the aforementioned Hamilton at bat, which ended with him striking out looking. The lack of consistency in calling the strike zone is the worst part of The Human Element in umpiring, but it is especially bad when it results in expanding the zone late while one team needs runs to win.

Bad umpiring and bad luck were not what happened to Alexi Ogando and Yoshinori Tateyama, though, as both took huge hits to their playoff candidacy. Ogando has pitched like a Top of the Rotation talent most of the season, but unless he is just extremely unlucky, he appears to be running out of gas in his first full season as a starter. He was not terrible, allowing only three runs, with three strikeouts and a walk, but he also only lasted five innings, and it was also the Oakland Athletics. If what we are seeing from him this late in the year is his talent level going forward, he is the Rangers' fifth best pitcher, and the fifth best pitcher does not start in October.

Tateyama, however, was more alarming. He entered a tied game in the sixth, needing to minimize the damage in a bases loaded situation to keep Texas in it. Instead, he allowed a grand slam in his second consecutive appearance. Even still, those were not the winning runs. The problem was Yoshi didn't stop there, allowing a single and a double for what turned out to be the winning run. He faced three batters, allowed five runs, and retired no one. Tateyama has been a nice reliever in Texas this year, but if he's not able to get people out down the stretch run, he has no place in an October bullpen that already has more proven talent filling it up.

The Rangers still kept it close, like the box score says. Adrian Beltre and Michael Young had themselves a big game, with three hits a piece. Ian Kinsler also reached base three times to continue building on to his career year stats. As late as the eighth inning, Texas managed as much as a 38% win expectancy.

But there was no win, and now Rangers fans have to watch to see if the Angels can stay back. Just like the A's said about the game tonight, it should not be this close, but it is. Last year we did not have to endure a pennant race, and this year we do. 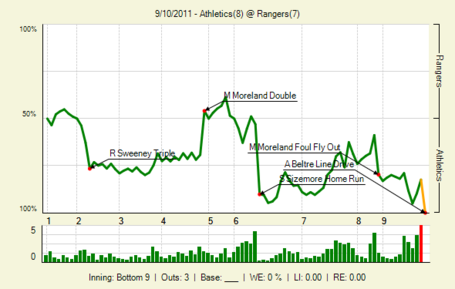