With all the stress that has been born out of the collapse in the Red Sox series, the Angels' white hot run, and the AL West race becoming somewhat close again, there has always been one reason Rangers fans could rest a little easily: they root for the better team, and tonight Texas -- led by Nellie Cruz -- served notice of that.

The Angels' are rolling with the strategy that starting their three best pitchers this series -- even if two are on short rest -- is what they need to win the division, and so far it is not working out. Dan Haren, the pitcher not on short rest, lasted only in to the fifth inning, surrendering a staggering 11 hits and seven runs. That means the Rangers have now scored 16 runs in 16 and a third innings against Haren this year, making the absurdly one-sided trade the Angels pulled to get him a little easier to stomach.

On the subject of absurdity was the evening Nelson Cruz had. He began the scoring in the second inning by doubling home Mitch Moreland and Mike Napoli, then added the third run with a solo shot that nearly found its way all the way to the top of Green's Hill. An infield single in the fifth loaded the bases, setting up a David Murphy grand slam that opened the game up, and a three-run blast in the sixth capped off the scoring. Only one scoring play -- a Mitch Moreland double to score Michael Young -- did not involve Nelson Cruz at all. In short, he was the bright and shiny star of this big game.

Credit should also go to Murphy, who took a break from his awful year to produce the shot that made it a blow out as one of his three hits, and Derek Holland, who showed up as Good Dutch Friday. Holland struggled a tad finding the zone, which produced a couple of walks, but had the stuff to make up for it with eight swinging strikes, six strikeouts, and eight scattered hits which were rarely well hit. He wore down some in the seventh, allowing a few well hit balls to break up his then-shut out, but by then it was 11-1 with two outs in the seventh, and he had done his job well.

Unfortunately, the silver cloud needed a black lining, and that came from the Texas bullpen. In the eighth, there was Yoshinori Tateyama allowing four singles, including a three-run shot by Russel Branyan. In the ninth, then, Mark Lowe surrendered a two-run blast to Howie Kendrick. A win is a win, and a four run victory is still a more-than-solid win, but finishing there after being seven outs from an 11 run victory leaves a bad taste in the mouth. Even more so when it comes with another Rangers' bullpen disaster; though, it should be pointed out, both Lowe and Tateyama have been decent relievers in '11.

Four runs or 11 runs, the Rangers stretched the division lead back up to three with only 29 games to go, and knocked two games off the magic number. There are five more games to go with the Angels, but the better team has a not-too-small lead for this late in the season. 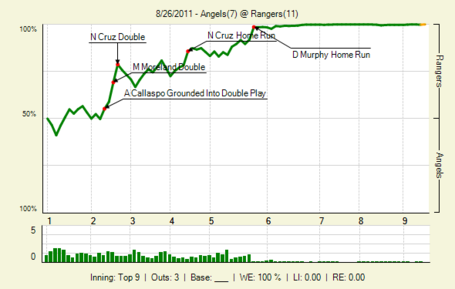