Share All sharing options for: Rangers Disappoint In 14 Run Victory

Just another pathetic performance from the 2011 Texas Rangers.

Against the Twins Monday Night, the Rangers managed a win to get back to 15 games above .500, but you have to look pretty hard to find anything good to say about it.

Derek Holland went six innings without allowing an earned run -- the only run coming on a Chris Davis error -- with four strikeouts against no walks before being pulled on 90 pitches. He had little trouble throwing strikes, and topped 96 miles per hour on the fastball, but he also only had five swinging strikes. The Twins may be one of the toughest teams in baseball to get swinging, but that is no excuse, and six innings of 0 ERA ball should be the bare minimum from this rotation.

The offense certainly had some bright spots, but was only able to eke out 20 runs; good enough to win Monday night, but hardly enough for a typical game. The average American League team scores 4.3 runs a game, meaning it takes them less than a week to do what the Rangers took a whole game to accomplish. Texas scored at least once every inning but the sixth and eighth. They managed only 27 hits, just the second highest total in the history of the franchise, with every starter scoring at least one run, and Chris Davis (0-6) even failing to get a single hit the entire game.

Omar Quintanilla -- who did not even start the game -- had the only triple.

Now, on paper, this may not sound bad, but the fact is, the Rangers' pitching could not keep this from becoming a 14 run game.

Unwilling to go to the elites of his bullpen, even as tight as the game was, Ron Washingon sent in Arthur Rhodes to follow up Holland, and Rhodes allowed three hits -- one a home run -- a walk, and three runs against no strikeouts in the seventh. Scott Feldman allowed a run of his own the eighth, and Neftali Feliz -- actually one of the elites -- allowed another in the ninth. These are little bits and pieces from a pitcher who was probably just trying to get some work in, and two pitchers who likely will not show in so many high-leverage situations, but those little bits and pieces add up, and before you know it, you are only leading 20-6.

What makes it worse is that the offense had 18 runs before the second out was even recorded in the 5th inning. They had the opportunity to really put the game away, but instead, they went in to operation shut down, scoring just two runs the rest of the way -- both in the seventh. They may not have wanted to show up their opponents, and that is admirable, but Minnesota was able to climb right back in to the game as a result.

Through the entire game, Texas batted around only twice. The Rangers scored at least three runs in each of the first five innings, but, according to Randy Jennings, that's happened twice before since 1900. Texas's +95 run differential is only the fourth best in baseball, three whole runs behind Philadelphia for third place. The Angels also lost Monday Night, which makes the Rangers inability to put the Twins away even more frustrating, as Texas narrowly escapes with a now-four game lead in the AL West, and two games taken off the magic number.

This team should be held to a higher standard. Quality Starts from the rotation and 20 runs from the offense will not get it done every night, especially in October. They once scored 30 runs in a game, can they not do that every night? Hopefully, this is just a blip on the radar, and future games will feature margins of victory that barely top a baker's dozen.

P.S. Mike Winters's strikezone was horrid. The low strike is rarely called these days, but he was more like a flip-a-coin kind of low strike caller on Monday. You can see for yourself below.

P.P.S. The Rangers are averaging a 6.8 runs scored to 2.7 runs allowed with a 15-3 record since the end of Interleague play. They could do better. 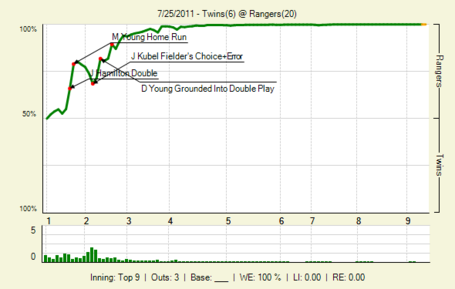 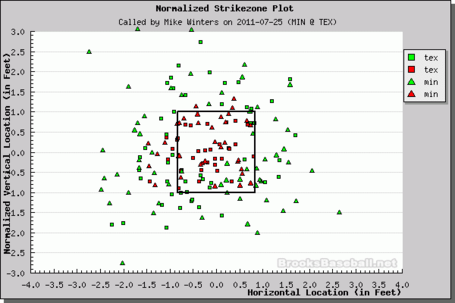