Share All sharing options for: Epic Ninth Gets Rangers Victory

There was some stuff that happened in the Rangers game Saturday. Ian Kinsler had a double that was just shy of a home run. The Rangers had a ton of hard hit balls find Blue Jay gloves; FanGraphs has 32.3% of their balls in play recorded as line drives to 18.2% for Toronto. Josh Hamilton got a hit in each of his first three plate appearances, including a triple, and added a walk later for one heck of a game.

On the defensive side, Matt Harrison pitched pretty well, with good velocity, 14 swinging strikes and eight strikeouts to no walks, but had himself a melt down in the sixth inning. J.P. Arrencibia somehow turned on a low and in fastball -- emphasis on the word ball -- and sent it in to the stands; Harrison seemed to decide an unhittable pitch being crushed should be followed by very hittable pitches. Reverse psychology maybe, but it did not work. A fat change in the center of the plate became a double, another change even more in the center became a triple, and a pitch thrown to Jose Bautista became a single. Suddenly, a 3-1 lead was a 4-3 deficit, despite Harrison showing all the peripheral strength you could hope for.

All that nonsense is unimportant, though, because this game was about the finish. The unlucky offense and the mental lapse from the young starter just helped set up for another memorable moment in a season trying very hard to be as memorable as last.

It began with the Blue Jays bringing in Marc Rzepczynsk, whose name I just cut and paste instead of trying to spell it myself. He is a lefty, and the Rangers had lefty-killer Mike Napoli on the bench. Normally, that is not a call you see, but Ron Washington is often pretty cautious about bringing in the back-up catcher. Tonight, he threw Toronto a curveball and brought in Napoli, anyway, and despite going down 0-2, he was able to work an awesome walk.

With Mitch Moreland now facing a lefty, the bunt was called. It may seem like a waste of a bat, but then when the hitter is putting up a .222 wOBA against lefties, it might just be the right call. What you do not expect is for Moreland of all people to beat that bunt out for a hit, but that's what he did, putting runners on first and second.

Already now there has been a great battle at the plate to work a walk, and a stunning bunt hit, an exciting inning before anyone had swung to put a ball in play. Ian Kinsler followed up with another bunt, this of the normal variety, putting runners on second and third. Not as exciting, but Kinsler did almost make it safe.

Then all hell broke lose. Elvis Andrus squeezed a third consecutive bunt, and without a diving grab by J.P. Arrencibia, would have been safe at first, likely allowing the winning run to score in the process. As it was, Napoli scored from third to tie it, and the head-spinning inning had the winning run at third and Josh Hamilton up.

Hamilton, of course, was walked, bringing up the so-called clutchiest clutch-master in all of clutchdom, Michael Young, to win it. You know already that he did win it, doing so with a fly ball to the wall in right. What you do not know, if you did not watch, was how exciting even that final moment was. Not content to let Rangers fans celebrate until the last second, Corey Patterson took a bizarre, adventurous route to the ball, looking all the while like he might catch it, but with just enough doubt to keep us in suspense. When the ball dropped beyond his reach and the winning run came home, Dave Barnett let loose what has to be his best call of the year, and the Rangers had escaped with a victory to make up for the one they handed over just a few short days ago.

At around 8:30, the Orioles had held on down the Angels. With the Rangers leading at the time, it looked like a shot at re-gaining some ground in the division. Without the series of bunts or Patterson's not-so-straight line, the Rangers would have merely tread water, but they now look at a four game lead once again, and have put away the series against their new nemesis easily.

I would prefer a lot more 12-2 games than what we just saw, but there is nothing like a wild finish to get you pumped. 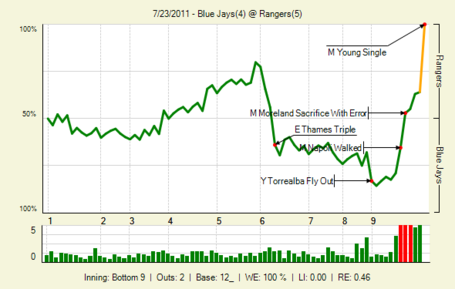 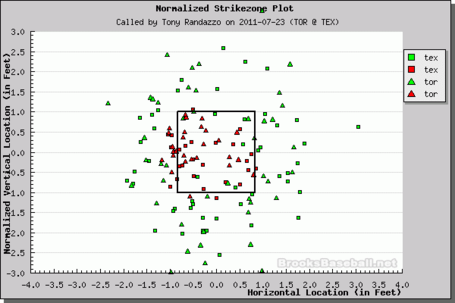