Where One Tick On The Magic Number Came From

Share All sharing options for: Where One Tick On The Magic Number Came From

The Rangers jumped their division lead up by a game and knocked two games off their magic number today. This is how half of that lead and one of those magic number games was earned: 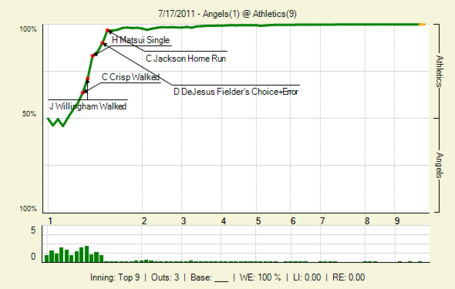 The Angels lost 9-1 to the A's, with the bottom of the first inning looking like this. . .

If you're scoring at home, that's seven runs on two hits before the Angels had even recorded an out. Once the dust had settled, the Angels were down 8-0 before the second inning even began, with only five hits allowed, and a win probability of 2.2%. It looked like the Rangers were at least going to tread water in the division before things had even really started, and it's all thanks to Joel Piniero.