Share All sharing options for: An Annual Tradition: The 11 Game Winning Streak 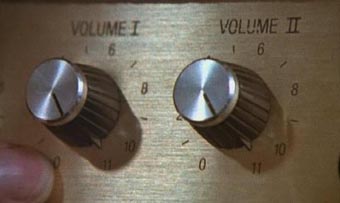 The Mariners are bad. We know that now. They are a bad team. They should lose a lot more games than they win, mostly because their offense is roughly as potent as the Mexican food you can find near their ballpark. So, sweeping them is not nearly as impressive as sweeping even a mediocre team like, say, the leaders of the AL Central, let alone the beasts of the AL East.

That said, sweeping a team on the road is still an accomplishment, no matter how bad they are. MLB teams just are not bad enough to expect to be swept at home, let alone a four game series. Then when you factor in a pitcher who will likely one day have a plaque in Cooperstown starting one of those games, and a total victory of 17-2, to cap off an 11 game winning streak, and it starts to be pretty special, even against a bad opponent.

This year is going to condition us to expect an 11 game winning streak every year. Rangers fans had only seen something like that once before 2010, and now they have seen it twice in as many years.

Struggling Mitch Moreland served as the offense today, when he followed a David Murphy single and Mike Napoli walk with a home run to right. In the second inning, it seemed like it was a great start to a one-sided game, but ended up being the only scoring on the day. Adrian Beltre and Napoli each had doubles in later innings, but each were stranded, and those were the only other extra-base hits in the game as Texas could not do much against former Rangers prospect Blake Beavan.

The offense did not need to show up, though, thanks to Matt Harrison pitching well enough to take advantage of the Mariners offense being themselves. Harrison was not especially good at finding a mostly-fair strikezone, but it was in there enough (63%) for his pretty nasty stuff to get 10 swinging strikes; four coming on his fastball topping out at close to 96 miles per hour, and five on his change. That resulted in only four strikeouts, but also just one walk, and with the support of the Texas defense (particularly one Elvis Andrus today), and coming against the Mariners that will, often get you a quality start. In this case seven and two-thirds innings pitched, five hits, and one run allowed.

A man who did look legitimately great was one Neftali Feliz. Pitching for the third straight day, he found the strikezone with 11 of his 17 pitches, with a fastball hitting 99 miles per hour, a couple tosses of what looked like a cutter, and seven swinging strikes (one on the "cutter"). It was the kind of stuff we like to see from Feliz, and against Seattle it just makes the hitters look silly. Two strikeouts and a shallow pop fly were all he needed for a dominant save.

The Rangers' prospects look so bright right now you have to wear sunglasses to look at them. 11 wins in a row and still counting, 14 games above .500, a four game lead in the division, and a chance to really put the division out of reach in the upcoming series against Anaheim. Even before the games were played today, Baseball Prospectus had the Rangers as a one-in-ten shot to miss the playoffs. They are not suddenly the best team in baseball, but they have firmly put themselves in the conversation as the best of the second tier of teams, and are looking as magical as they did at this point in 2010 (with a better showing against Baltimore!).

You now have the rest of your Sunday evening to reflect on how nice being a Rangers fan is these days.

Do not think about soccer. 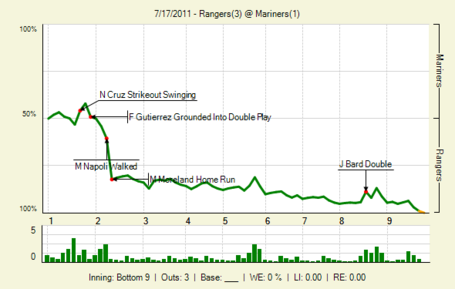