It is very hard to feel better than opening up the second half with a dominating road win. Particularly after such a fantastic end to the first.

Tonight may feel a tad bit disappointing, though, if you watched. Derek Holland was on, and for five innings that meant perfect baseball; just about the point you start to care about what's happening. A Franklin Gutierrez walk to open up the sixth ended the perfecto, and a Chone Figgins hit afterwards ended the no-hitter. Something potentially special was suddenly just another game.

By the end, however, it was not just another game; it was the second straight complete game shutout from young Holland. I wish I could fully understand why he can't channel this excellence regularly, or at least be okay when he's at his worst, instead of putrid. I certainly couldn't fix it, but, maybe, if I understood, I would accept it better, instead of being aggravated by sometimes-wasted potential.

Tonight, though, that potential was on marvelous display. Yes, he shut down an awful offense in the Mariners, but shutting out any team on the road is a big deal, no matter how bad they are. No MLB team averages under a run. Holland's fastball was electric, averaging close to 95 -- even well after throwing 100 pitches -- topping out over 96, garnering six whiffs, and hitting the strike zone with regularity. The change-up kept hitters off-balance, and the slider was good enough to get a couple misses, but the star was that vicious fastball and how little the Mariners could do with it. Eight strikeouts, one walk, no runs, no relievers. Mariners or no, it was a tremendous start to the second half, and a reminder that Dutch has a very attractive ceiling in him.

The offense was good enough for most starts, let alone a shut out. Josh Hamilton homered in the first to start the scoring off, and Nelson Cruz and Mike Napoli each added solo home runs of their own. Elvis Andrus capped off the scoring with a single in the sixth, his second to go with a walk. He also scored the third run when he advanced to second on a shallow fly out to center, then scored on a Michael Young double that was only a double because of Andrus booking around third. Though he was caught stealing later, Andrus had himself a game, both at the plate and, especially, on the basepaths, and I point this out so that I can point out the fact that he leads everyone in all of baseball in value added on the basepaths since he came on to the scene (per FanGraphs). He is magic on the paths, and that needs to be appreciated.

Another thing that needs to be appreciated is Ian Kinsler:

The 2011 team that has now won eight in a row, and is sporting the best run differential in the non-NYY/PHI/BOS category. 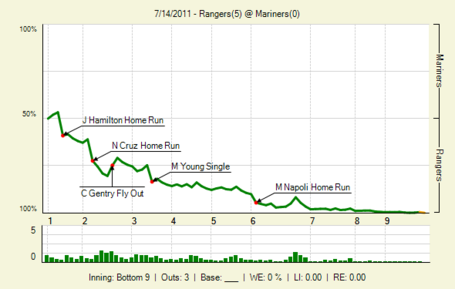 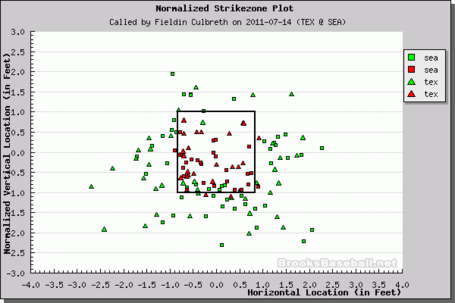