With one out in the bottom of the third Wednesday, it looked like the Rangers might be headed towards another awful game in what had been a miserable series. Alexi Ogando had allowed the Tigers a 1-0 lead with a homerun by the second batter of the game, and took 40 pitches to get through the first two innings. The Rangers, meanwhile, could not get to Phil Coke, seeing just 16 pitches through the first two scoreless innings.

Sure, it was early. Things were looking better, after Ogando had only taken five pitches to get through the third, and the Rangers had the bases loaded. But Craig Gentry was the man at the plate, Ogando's count was still high, and after the way the first two games went, it was hard to really look at the game in a positive light. Gentry hit the fifth pitch he saw on the ground, and it looked like, yes, the game was going to be another horrible day against Detroit.

Don Kelly -- who represented the only run to that point -- couldn't get to the ball in time to turn a double play, but he still had a chance to keep the Rangers from scoring a run. Except he tossed the ball over the head of the catcher, allowing Yorvit Torrealba to score, and an alert Chris Davis -- called up to fill in for Ian Kinsler -- got in, as well. In a split second, the Rangers went from seemingly wasting a good opportunity in a losing effort to taking the lead. And as if the Tigers hadn't paid enough, that brought up Josh Hamilton, who smoked a ball to right field for a double, and suddenly everything was different as it was 4-1 Rangers.

Of course, that play likely didn't actually change the results of the game. Ogando never really struggled again, allowing just four more baserunners through the next four and two thirds-innings pitched, and no more runs. His final line of seven strikeouts, two walks, and just one run allowed makes the rough start to the game seem hard to believe. Kelly's throw and Davis's hustle didn't make Ogando pitch better. Conversely, Adrian Beltre and Elvis Andrus singles (one of three more hits) and a Beltre home run added runs that were enough to tie, if not win, even had Torrealba not scored in the third.

But it felt like things changed on that play. Even if only symbolically, it was the awesome moment that made the game feel different than the entire series had to that point, and the Rangers followed it to a nice, easy win.

The bullpen allowed three runs to make the final score a little closer, but it was better than it looked. Darren Oliver had two strikeouts and allowed a legit single to open the first, and that single was followed by a Past A Diving Michael Young™. With one out, Elvis Andrus allowed a deep single to give up a run, and a second scored on a ground out, but came back to end the game on a strikeout. With two swinging strikes, a good slider, and few balls, Feliz looked good for the fourth game in a row, making it even more easy to believe he's back. If Ian Kinsler is in the field, he and Oliver likely combine for a shutout inning and a third with two or three strikeouts in a 7-1 victory.

This series was still awful, but the Tampa and Cleveland series were so good this has still been a great 12 game stretch. At the very least, a sweep was avoided in another easy game with seven more Rangers runs. 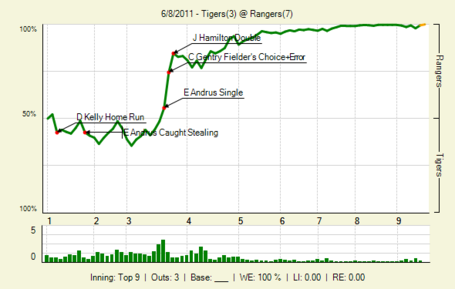 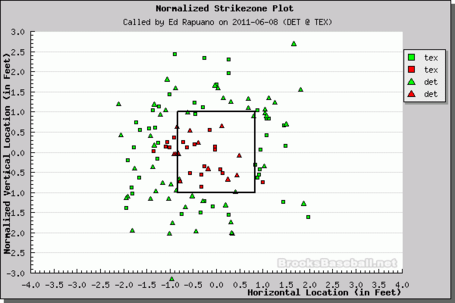 Alexi Ogando Does It Again As Rangers Top Tigers 7-3