The Texas Rangers today finished off four games played about as perfectly as you could imagine in one of the most difficult environments you could concoct. Prior the series, the Indians had lost just six times at home. And the Rangers didn't just beat them, they dominated, winning by the combined total of 24-6.

To finish off the sweep, C.J. Wilson was awesome, pitching seven and two-thirds innings of shut-out, three-hit baseball. Like it was in Tampa, his stuff was electric, showing command of all of his pitches, and getting whiffs on 12 of his 103 pitched. Unlike Tampa, he didn't couple that with a pair of meatball homeruns, or walk problems, even without getting the benefit of low strikes. With seven strikeouts and two walks on the road against one of the better offenses in baseball, Wilson reasserted his name belongs with the best pitchers of 2011.

The offense struggled a bit against Mitch Talbot. They produced eight hits and three walks, but only two for extra bases. Fortunately, both those extra base hits managed to leave the park thanks to Mitch Moreland -- his eighth, already approaching what some thought was his ceiling -- and Elvis Andrus. Yes, really!

But while the Rangers didn't seem to bring their bats, they did bring their gloves, helping Wilson to turn his fantastic start in to a shutout. The Indians managed plenty of fly balls off him, but only two found the ground, and a few hot shots also found Ranger leather, with Texas making sure even if they couldn't score more than two, it would be enough. Typifying this was Adrian Beltre, who ended a promising bases loaded threat in the seventh with a double play, but made up for it in the field by snagging a hard line drive in the bottom half, and starting a difficult double play three innings prior. This team is complete enough that even without generating power you can imagine ways for them to win games, and today was one of those.

All this came also with another fine bullpen showing. Darren Oliver struck out the only batter he faced in relief, and Neftali Feliz had his third game in a row with no trouble finding the strikezone, taking just eight pitches to close out the game, ending with a swinging strikeout.

It's pretty funny that the closest the Indians ever got to winning a game in this series was a three hit shutout.

Everything is going right now. Texas looks just about as dominating over the last week of games as they did at the start of the year. The pitching -- outside of Dave Bush -- has clicked for an entire rotation, the bullpen has been strong, the offense has improved with the return of Josh Hamilton and Nelson Cruz, and the defense is looking more like it was supposed to. The Rangers now own the most wins in the AL, the second best run differential in baseball, and will end the day no worse than 2.5 up in the division after one stellar sweep. For now, the not-that-long-ago idea that Texas might not be much better than mediocre seems quaint. 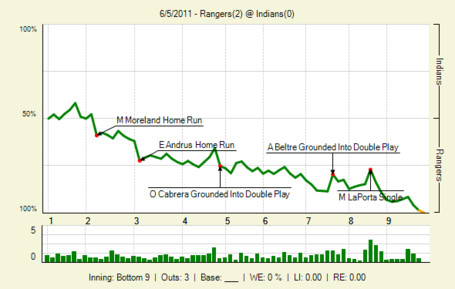