Share All sharing options for: Derek Holland Rebounds Against Indians

Every now and then, Holland gets the mind to pitch to his potential as formerly one of the best prospects in baseball, and Saturday was one of those times. Coming in with a 4.96 ERA and an even better 4.23 FIP, it's looked like he might be having a turnaround year, but a couple bad starts in a row had led to fears he wasn't.

He responded tonight by pitching on the road against (maybe?) the best team in the league, in front of his parents, for nine innings without allowing a run; commonly referred to as a Complete Game Shutout, the second of his career. It wasn't the best stuff he's ever had, with eight swinging strikes and five strikeouts, but he also kept the ball down while finding the strikezone, getting ground balls, avoiding walks (just one all game), and avoiding the fly ball problems that have plagued him at times.

Most importantly, we know Holland has terrific stuff. What he showed tonight was an ability to make due even when the stuff wasn't quite getting the bats to miss. The most trouble he ever faced was the sixth inning, when Adam Everett worked a one out walk, followed by a Michael Brantley single. After getting another out, Adrian Beltre dropped an Asdrubal Cabrera ground ball, loading the bases. Instead of melting down, Holland got another ground ball from Carlos Santana to end the threat. Similarly, the next inning saw a hit by pitch and single putting two on with one out, but was quieted down by a strikeout and fly ball.

With just five hits allowed, that was about as rough as it got for Holland, but those situations were the test. On a day when he couldn't quite blow people away as much as we know he can, Holland managed to do something people sometimes wonder if he can do: survive pressure situations.

There was some defensive help, too. With two on in the second, a Shelly Duncan line drive went straight to Ian Kinsler, who handled it for a double play, followed by a wonderful play by Elvis Andrus to end the inning. Holland wouldn't have had a shutout without the help of the sterling defense behind him, but shutouts are what happens when good pitching, good defense, and good luck come together. A little bit of help doesn't mean Holland was not good -- and more importantly encouraging -- in Cleveland.

Speaking of encouraging signs, the only offense he needed came from moon shots by Josh Hamilton and Nelson Cruz, each with a runner on. Both continue to carve pitchers, serving notice that their missing bats were a major part of the Rangers' slump, and those missing bats have returned. When the Rangers started the year at full strength, they looked like they might be the best in baseball. Now at full strength again, they might just be the best again for as long as that health holds up.

This was a series where playing well and getting a split would be fine. Instead, the Rangers have now secured at least a win -- with a shot at the sweep -- on the road, against the team with the best record in the AL coming in, in 22-6 beatdown fashion. Similarly, this was a roadtrip where merely getting four wins would be a success, and they instead have five already, with every win being one sided and the single loss coming by a run.

These are good times. Texas is now tied for the most wins in the AL, and with an earlier Mariners loss, they are now 2.5 up in the division. 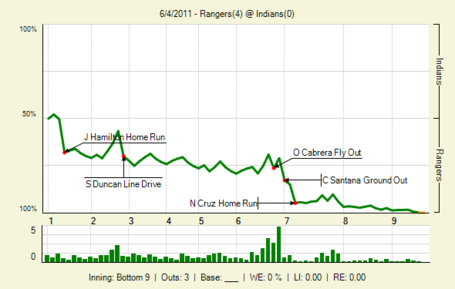 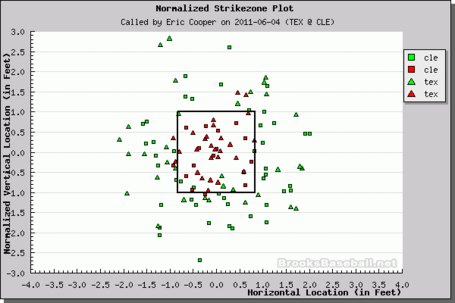