Most of Friday's Rangers game was a tight affair. Early on, the Rangers were cost a run when Mike Napoli was incorrectly called out at the plate, ending the second inning with just a run scored, rather than letting it continue with two. Though the next inning may have had a make-up call with Josh Hamilton running to first, which scored a run and continued that inning, that was all the scoring the Rangers got through the first two thirds of the game.

Alexi Ogando was cruising, with his usual recipe of throwing a lot of strikes (68 of 100 pitches) and missing bats (15 swinging strikes). That worked out for six strikeouts to one walk, and with a lot of ground balls, eight innings pitched of four-hit, one-run baseball. Ogando seems to be only improving as the season goes along. His season ERA is still the result of some good luck, but even his peripherals at this point are suggesting a good No. two pitcher in a rotation, and he's been trending upwards from even that more-than-okay level. Against all odds he's gone from someone who seemed like he may never pitch in the country, to a good reliever, to a starter with the stuff to dominate the best team in the league on their turf and have it be no surprise. If he continues improving -- or even just pitching at this level he's at right now -- and doesn't run in to a wall after hitting a new innings pitched high, he will be a great piece for a playoff rotation.

Even good pitchers make mistakes now and then, though, and Ogando's came with consecutive line drives allowed in the sixth. He induced a double play to minimize the threat, but a run was able to score in the process, and the Rangers were clinging to a one run lead with nine outs to go.

Then it became a blowout. Ian Kinsler walked. Elvis Andrus singled (one of his four hits in the game). Then Josh Hamilton casually swung at a ball in a fashion that you'd think might turn in to a soft single with some luck, but because he's Josh Hamilton it left the park and the game was suddenly no longer close.

But it didn't stop there. With two outs, Shin-Soo Choo and Michael Brantley completely lost an Adrian Beltre flyball in the lights for a double, allowing the inning to continue, and Nelson Cruz extended the beat down with a home run to left. Mitch Moreland struck out, but in one inning, the game was 7-1, more than enough for the way Ogando pitched.

The Indians never touched Ogando again, but a bases loaded Andrus double in the eighth, and Endy Chavez's third hit of the game in the ninth extended the lead to 11-1. In three late innings a close affair turned in to a blowout.

Yoshinori Tateyama came in to end it and hung a pitch to Asdrubal Cabrera to make it 11-2, but after a harmless ground ball and two strikeouts, the Rangers had another win highlighted by a good sign from the bullpen -- becoming more frequent an event these days.

The Rangers struck out 10 times, but also had 19 hits -- seven for extra bases. The guys who you expect to hit -- Hamilton and Cruz -- did again, with Hamilton finishing a triple shy of the cycle. The guys who you don't expect to hit did, too, with Andrus's great game also including his 19th stolen base without getting caught, and Chavez -- who maybe you do start expecting to hit -- having three more hits, including a double. Even the new acquisitions of Beltre and Mike Napoli showed up, with five hits between them and a double each. Only Michael Young failed to reach base (including Craig Gentry, who replaced Hamilton late).

When Ogando's on, offense like that is unnecessary, but it sure is fun to watch. Every thing about tonight was good signs, and a great win.

That's becoming a trend with Texas. They've now guaranteed at least a split on the road against the team with the best record in the AL -- a good feat in itself -- and have a chance to actually win, or even sweep. Another win would make it the fourth straight series won -- the second straight on the road against a good team. That's nine of their last 12, with only a late Evan Longoria home run standing in the way of a seven game winning streak. 18-6 over the Indians so far means a 36-16 start to a grueling road trip, giving the Rangers the second best run differential in baseball and -- gasp -- just one win behind the Indians for the most wins in the American League.

In short, Texas seems to have survived their early May lull to remain one of the best teams in baseball, and are playing like it right now. 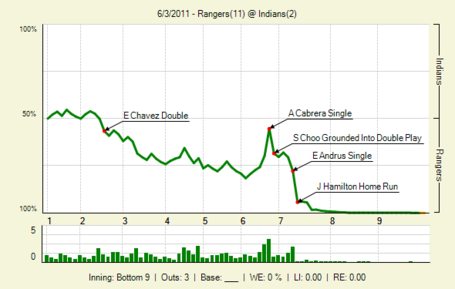 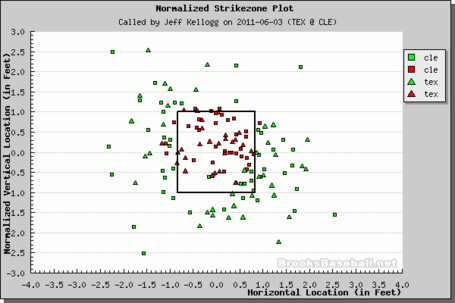