You can't expect to sweep a team in baseball, but hosting the Astros at home is about the closest you'll ever get. The Rangers were just two measly outs from getting that sweep tonight before they coughed it up in crushing fashion. They still won the series, but while a series victory is always nice, they need to outperform their expectations now and then to make up for some underperformances earlier in the year.

All it would have taken is just two more outs.

Neftali Feliz has had a good run of looking very nice for a while now, but even if he is truly "back," he is going to have a down game sometimes. Last year he was an elite reliever and yet lost a game with a grand slam surrendered to Corey Patterson (or not, if you've expunged that from your memory). It happens.

And it is going to happen more often after he threw 35 pitches in two innings the night before. That's where the biggest question of this game comes from: why was Feliz in there? His velocity was a tick down, his pitches were hittable, and he missed not one single bat in his outing. All things that make sense the night after a huge work load, and with Darren Oliver and Michael Kirkman both out of Tuesday's game, you had to wonder if the right decision was made even before Feliz allowed four runs to blow the save and the Rangers' chances of sweeping away the worst team in baseball.

Darren Oliver struck out Michael Bourn -- his only batter faced -- to end the ninth inning.

Some offense also would have helped things, as the Rangers managed only seven base hits (though five walks is nice), and should probably be scoring more than three runs against Houston in Arlington. The bullpen performance -- and management -- was the villain of Wednesday night, but the offense shouldn't get off scott free, either.

The silver lining was a good start from Colby Lewis, who managed to overcome poor velocity (topping out at under 88 miles per hour) with good location and -- as usual -- a filthy slider for eight strikeouts against one walk on 15 swinging strikes. He surrendered just three hits, almost no solid contact, and breezed through seven innings before having to be pulled after being checked by a trainer. Sure, some of that is facing the Astros, but some of it was also Colby Lewis pitching well, and hopefully his removal was only a precaution.

The schedule leading up to the All-Star break is a golden opportunity for the Rangers to load up on wins and create some distance between themselves and the rest of the west. Merely winning the first series of that stretch is no failure, but given how close it was to a sweep -- and how sweepable Houston is -- it's very close. After an evening of amazing joy, the Rangers responded with incredible disappointment. 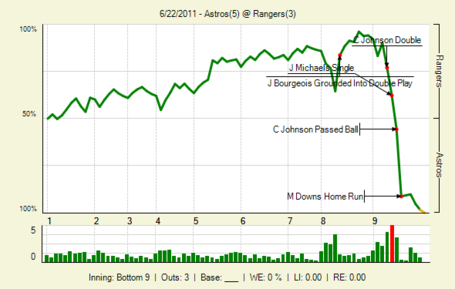 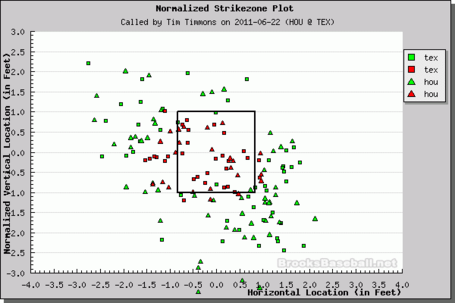