Not long ago, Mitch Moreland was the third first baseman on the Rangers' first base depth chart. He was a guy who didn't get a lot of attention, and was considered a fringy type of player who might have the plate polish to one day make the Majors, and maybe even contribute something.

Now in his first full season, he is the Rangers every day first baseman, has been one of the better hitters in the league, and is putting forth a solid season that might already be surpassing expectations for his peak.

And tonight, he was a hero.

When you play poorly, even the Houston Astros can beat you, and most of the way Saturday night, that looked to be the case. Perhaps, according to Steve Busby, due to a long effort in his previous start, C.J. Wilson struggled to get through a pretty impotent offense, giving up more than a bit of contact and missing few bats, though he also managed to avoid walks entirely. His struggles led to four Astros runs in fewer than seven innings pitched, and most of the way that made it look like a potential Rangers loss. The offense got baserunners, but kept on stranding them, with the biggest offender being Elvis Andrus, who went 0-5 with -24% win probability added. With the Mariners winning 5-1 in the ninth inning in Washington, D.C., it looked like the AL West would be improbably tied at the end of the night.

Sometimes in baseball, the bad games most of the way are worth it, though, because of the moment they lead to, and Tuesday was one of those nights. In the eighth inning, Josh Hamilton homered to tie the game at four, Neftali Feliz pitched two good innings -- supported by another from Yoshi Tateyama -- to keep it tied, and the stage was set for Mitch Moreland to take an aggravating game and turn it in to a memorable one.

Which is just what he did.

11 innings of being way too close to a loss against a really bad team were immediately ended when the first pitch was a hanging sinker, and a guy who was very recently just a lost name in a deep farm system sent it 422 feet to end the game in exhilarating fashion. It's what makes baseball -- and sports -- great, when heartache is finally turned in to joy. Analysis and discussion of all the things that went right and wrong just seems out of place when there's a moment this great to enjoy. Even better when it comes from a source once thought unlikely. 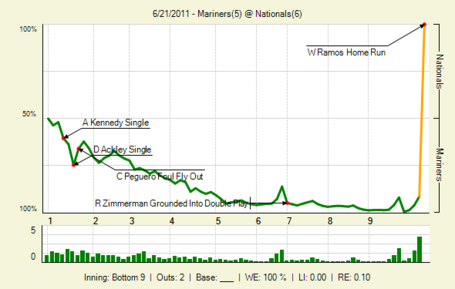 That's the beautiful graphic representation of what happened in D.C., as the Nationals scored five runs with one out left to win 6-5, capped by a three-run Wilson Ramos walk-off homerun. Only one Nationals' plate appearance in the entire game ended with a win expectancy over 50%, and that was the last. Two hours ago, it seemed like the Rangers would be tied at the top of the division, and thanks to a pair of dramatic comebacks, the division lead is now at two.

Most of tonight was awful, but it's all about how you finish, and tonight finished great.

Now if you'll excuse me, I'm off to be a mindless fan. 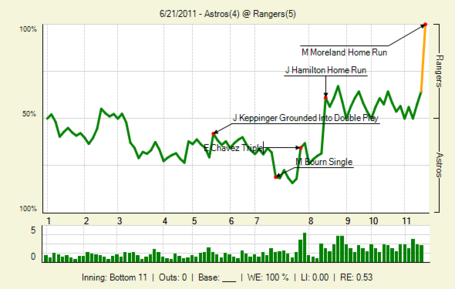 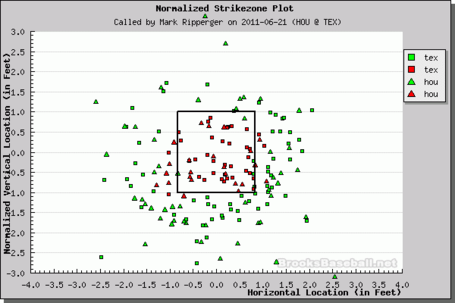