One Quarter Of The Way To A Silver Boot

Share All sharing options for: One Quarter Of The Way To A Silver Boot

Man, playing the Astros is fun.

Since 2009 in Baseball's little forced Texas "rivalry," the Rangers are 11-2 against the Astros, outscoring them by more than three runs a game. In 2011, it looks like the Silver Boot might be more easily won than ever, with the Astros already 20 games behind .500, and that's just how it started off Monday night.

This was a game that was only ever in doubt before it had started (and even then just barely). The Texas offense jumped all over J.A. Happ, and the Astros' defense did him no favors with one fielding gaffe after another giving the Rangers extra outs. The Rangers scored three runs in each of the first two innings and another in the third to stake Derek Holland -- facing an offense that scores fewer than four runs a game -- to a 7-0 lead in no time flat.

Every Ranger but Taylor Teagarden reached base at least once (Ian Kinsler on an error), with the big story being Craig Gentry. Gentry is a fantastic centerfielder, worthy depth and a good defensive replacement. For one night*, however, he was an offensive beast, with his first three hit game -- including a double -- and three stolen bases. Adrian Beltre also contributed three hits, Josh Hamilton put forth two -- with a triple -- and Mitch Moreland capped off the Rangers scoring with a mammoth home run deep in to the upper deck in right field. I don't think when Moreland was a prospect I ever had an idea he could launch moonshots the way he has on occasion this season.

*To be fair, Gentry -- partly thanks to a platoon role -- has been solid offensively all season, coming in to tonight with a .328 wOBA though through only 70 PAs.

On the other side, Derek Holland was not quite as dominating as one would hope against Houston. Facing an offense that likes to whiff on nearly one in ten pitches they see, Holland had just three swinging strikes. And against the second worst team at working walks in baseball, he offered up three against his for strikeouts, despite a fair, if not large, strikezone. Because the Astros are the Astros, he only allowed two runs (and a third was earned after Mark Lowe inherited a runner), and managed to go in to the eighth inning, but it was no awe inspiring start.

Still, he pitched well enough to win most nights, and with the offense clicking the way they did through the first three innings, that meant a relaxing blow out in front of a massive home crowd. It was a delicious way to start a run of games in to the All-Star Break where the Rangers should hopefully clean up on some wins. 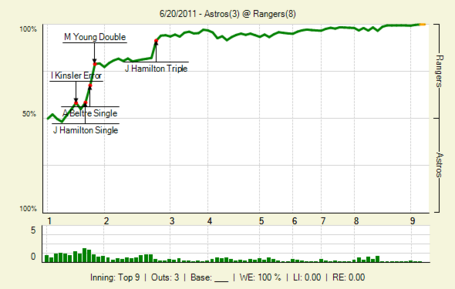 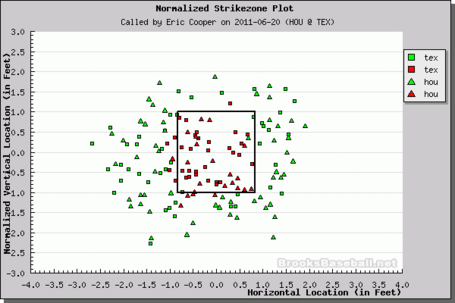