You don't typically expect to win a game where Dave Bush starts on the road against the best team in the league. That's a tough game to win, anyway, especially when the starting pitcher is just not good at starting pitching.

It looked, for the first part of Thursday's game, like that was just the case: the Rangers would not be beating the best team in the league on the road because Dave Bush was pitching. Bush was fine in the first, but in the second, he allowed three hits and a walk before getting a single out, and by the time the inning was over, the pitch count was up to 34 and the Rangers' hole was already 3-0.

Bush managed to avoid anymore damage, and three strikeouts to one walk is not that bad a showing. The problem was his bad all came at once in the second, and he was too inefficient to go far in the game, leaving after the fourth. He was no worse than you'd expect from Dave Bush, but when the fifth inning rolled around, the Rangers were already in a sizable hole, and were handing things over to the bullpen early in a game that never looked good on paper.

Then the incredible happened: the Texas bullpen came to play. Michael Kirkman pitched three innings of one-hit ball -- though the one hit left the park -- with four strikeouts, two walks, and four swinging strikes. Darren Oliver gave up a couple of strikeouts, but also managed to strike out Grady Sizemore and avoid runs. Then Mark Lowe hit 98, never once missed the strikezone without getting a swing, and got a strikeout and a groundball to end the threat. That's a lefty and a righty both pitching well, if you're scoring at home.

In the meantime, the Rangers offense began to punish Indian's starter Carlos Carrasco. Only Adrian Beltre and Yorvit Torrealba failed to reach base at least once. Endy Chavez -- who continues to look more like Jose Bautista than his pre-injury self -- had four hits, a stolen base, and scored on a wild pitch following a triple. By the end of the fifth, the game was tied. By the end of the sixth, the Rangers had a three run lead. All of a sudden, a game that looked scary before it started, and was only confirmed as scary after it was well under way, was looking like a Rangers victory.

The final piece was another straight strong appearance from Neftali Feliz. Happy once again had his velocity without missing the zone, this time throwing 80% of his pitches for strikes, mixed in some breaking balls that actually looked impressive (and a slower fastball that has been registering a lot lately), and had a strikeout. The only baserunner came on a soft fly ball that fell out of Elvis Andrus's glove. That was in, he didn't just look good, he looked dominant.

Dave Bush struggling and leaving early was no surprise. The Rangers offense showing up was no surprise. What was a surprise was the bullpen pitching extremely well, and that was the difference Thursday. This continues a good run for Lowe, was a reassuring performance from Feliz, and a good sign from Kirkman, all pieces which could help the pen improve without having to lose talent in trades simply by improving. Thanks to them -- and the offense led by an outfielder once thought hopeless -- the Rangers not only start a series against the best in the AL with a victory, they do so in a game they could not have expected to win most of the time. Let alone win by three runs.

This game makes up by itself for a couple of the games the Rangers should have won earlier in the year. This was not opening-the-season-by-destroying-the-Red-Sox awesome, but it was awesome, none the less. 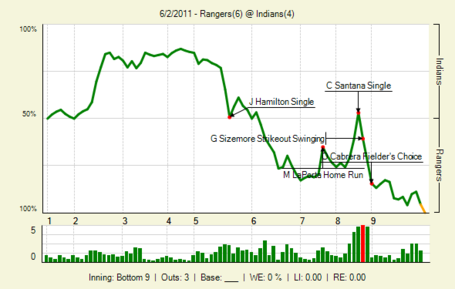 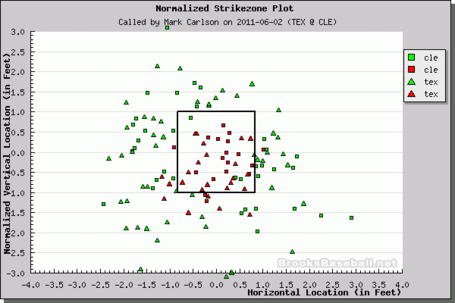