Share All sharing options for: Yorvit Torrealba And The Terrible, Horrible, No Good, Very Bad Inning

The Rangers leader in Win Probability Added on Sunday was Yorvit Torrealba, with just shy of an 8% chance of winning being produced thanks to his box score performance. That's what happens when you have two hits and one of the game's only two RBIs in a losing effort. His fourth inning hit helped a game that looked bad look a little better before it got too late.

The problem is, WPA does not capture all the things Torrealba did the inning prior to his RBI single which contributed to the game looking bad. The third inning started innocently with a Jair Jurrjens pop out, but that was followed by Jordan Schafer reaching on interference by Torrealba. Dan Uggla then reached on a ground ball single, and both runners advanced on what was ruled a wild pitch but was primarily a failure of Torrealba to stay in front of the ball. Then with a runner reached because of the catcher, and two runners in scoring position partly because of the catcher, Jason Heyward singled to bring home both runs and it was 2-0 Braves.

Yorvit wasn't done there, though. After another out, another single advanced Heyward to third before Alexi Ogando induced an infield fly by Alex Gonzalez to end the inning. Only, it didn't end the inning because Torrealba couldn't hear Michael Young screaming what everyone watching the game could hear: "I got it." Young was under the fly ball in plenty of time, but Torrealba ran in to him, anyway, and caused the ball to fall safely to the earth. With Heyward running, the run scored easily, and thanks in large part to mistakes ranging from bad to insane on Torrealba's part, the Braves had a 3-0 early lead.

Following his single, Torrealba was removed due to "fatigue," which is easy to believe. He's on pace for a career high in games caught, and this was his third straight start and second day game in a row. With hesitation to excuse him entirely, perhaps fatigue lead to his issues in the third, making him a bit more lazy and out of it than he would otherwise be. If he was actually fatigued, he probably never should have played, instead of being pulled midway through the game. Taylor Teagarden is very bad, but without Mike Napoli, giving him some playing time is a necessary evil, and may well have helped the Rangers avoid an early 3-0 hole.

Bad inning aside, though, the blame of Sunday's loss is not entirely on Torrealba (and/or Ron Washington for starting him). As mentioned, Torrealba was one of only two Rangers to bring a run home, as six Rangers were stranded in scoring position over the course of the game. While that may suggest some bad luck (unless you want to believe in choking), the fact that they only had a couple hard hit balls and hit well over half their balls in play on the ground suggests they were lucky to even score as many as they did.

Ogando, meanwhile, did not have such a hot start, striking out just three, getting only seven swinging strikes, allowing some hard contact, and lasting for only five innings. He also suffered a dramatic loss in velocity as the game went on, though at least he also avoided the walks, and probably could have had a quality start without so many concentrated mistakes by Torrealba.

Maybe the loss of velocity and inefficient start, and the weak contact by the offense, all relates to the same thing that had Torrealba pulled: fatigue. In Atlanta right now, it's 92 degrees with 40% humidity, trending to cooler at the time of this posting. This was the 10th straight game for Texas, the 14th on the road, and that weather at the end of this stretch could quite understandably drain a player. Jeff Wilson even tweets that Torrealba and Ogando required IVs after the game. If the Rangers just didn't have it, there are no bad signs to be found here, and not a whole lot for angst, it's just an off day in the midst of the season.

It is, unfortunately, disappointing to fall short of a big sweep, and to have to settle for a 10-10 record during this rough stretch. A win in Atlanta, and a .500 record during the toughest 20 games of the season, is a success, but after starting a series 2-0 and starting the stretch 6-1, it seems like things could go better. Unfortunately, super humans can't always be super human.

Disappointment doesn't mean things are bad. The schedule is easier starting tomorrow, and if the Rangers can play as well as they did these past 20 games, they will probably clean up with a lot more wins. 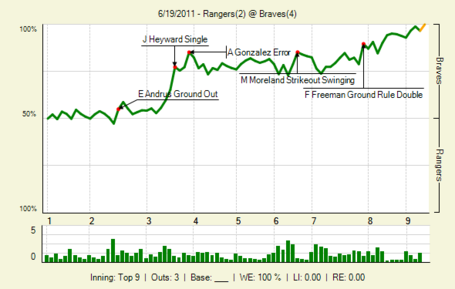